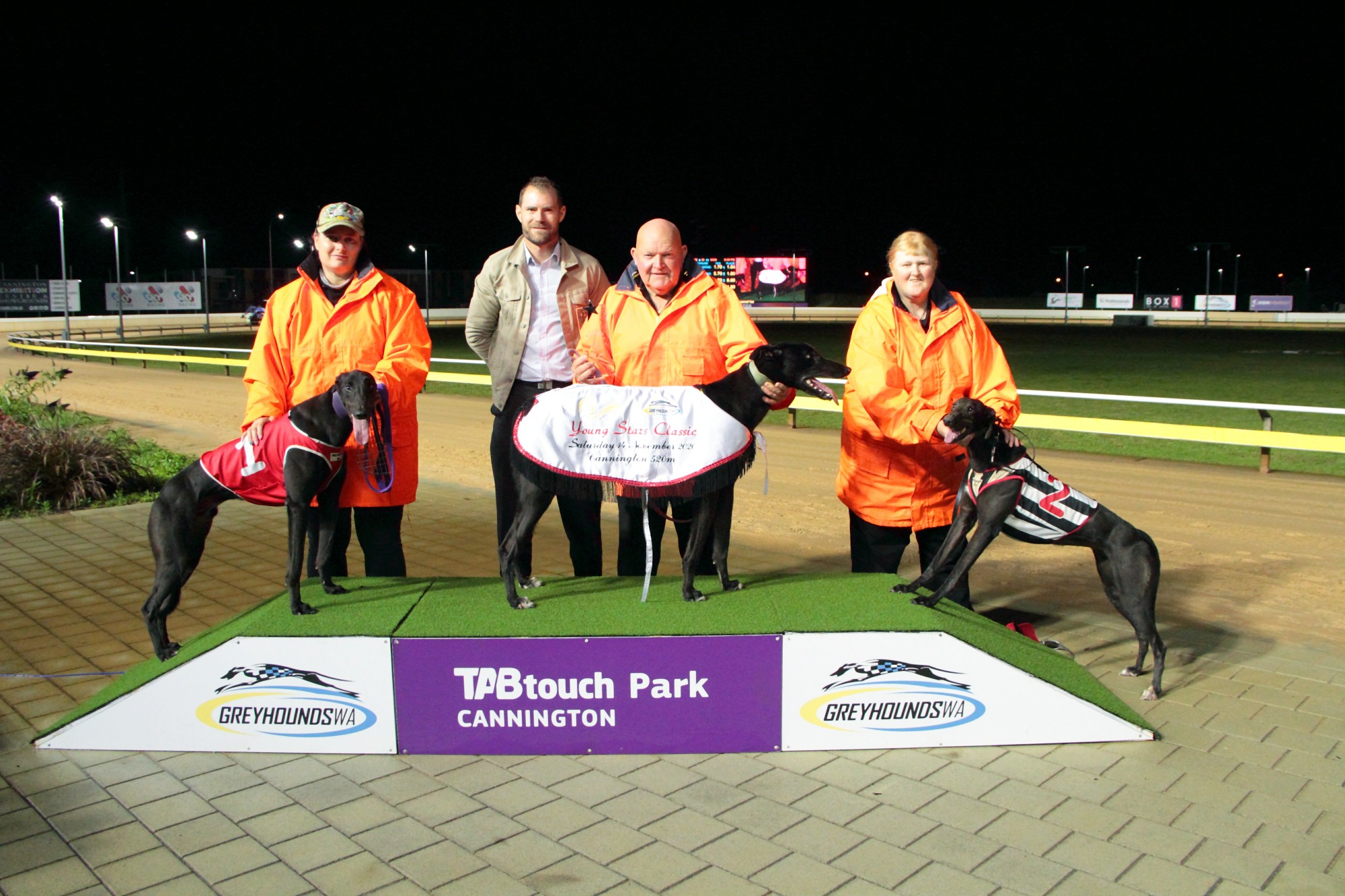 SUNSET SPITFIRE (Mepunga Blazer- Sunset Jessie) demolished his rivals in the final of the Greyhounds WA Gr 3 Young Stars Classic leading throughout and defeating litter brother Sunset Toxic by 8 lengths in a Race Record 29.56. The David Hobby star juvenile, who turns two years of age next month, is undefeated in 9 starts including a PB 29.45 on debut in August. The win was Hobby’s second after scoring with Topaz Monelli back in 2005.

STACKS OF KUNA (Fernando Bale- Leelicious) claimed the leader Cascade Monelli right on the line to break his Maiden status after 29 starts. The Michael Johnston trained dog had been placed 14 times prior to his nose victory in a time of 30.82 on a wet track.

ALL ZIPPED UP (Kinloch Brae- Zipping Spring) led throughout from his middle draw and scored a convincing 2 length win over Daisy Devine in 35.43. The Sean Kavanagh trained dog has now won twice and has been placed twice over the 600 metres at his past 4 starts.

NEED MORE KUNA (Fernando Bale- Leelicious) recorded her 6th consecutive win and her first over the 380 metres with an all the way victory scoring by 3 1/2 lengths over Sapphire Rose in 21.97. The Michael Johnston trained bitch had lowered the 16 second time over the 275 metres at her past 4 starts to show her ability. 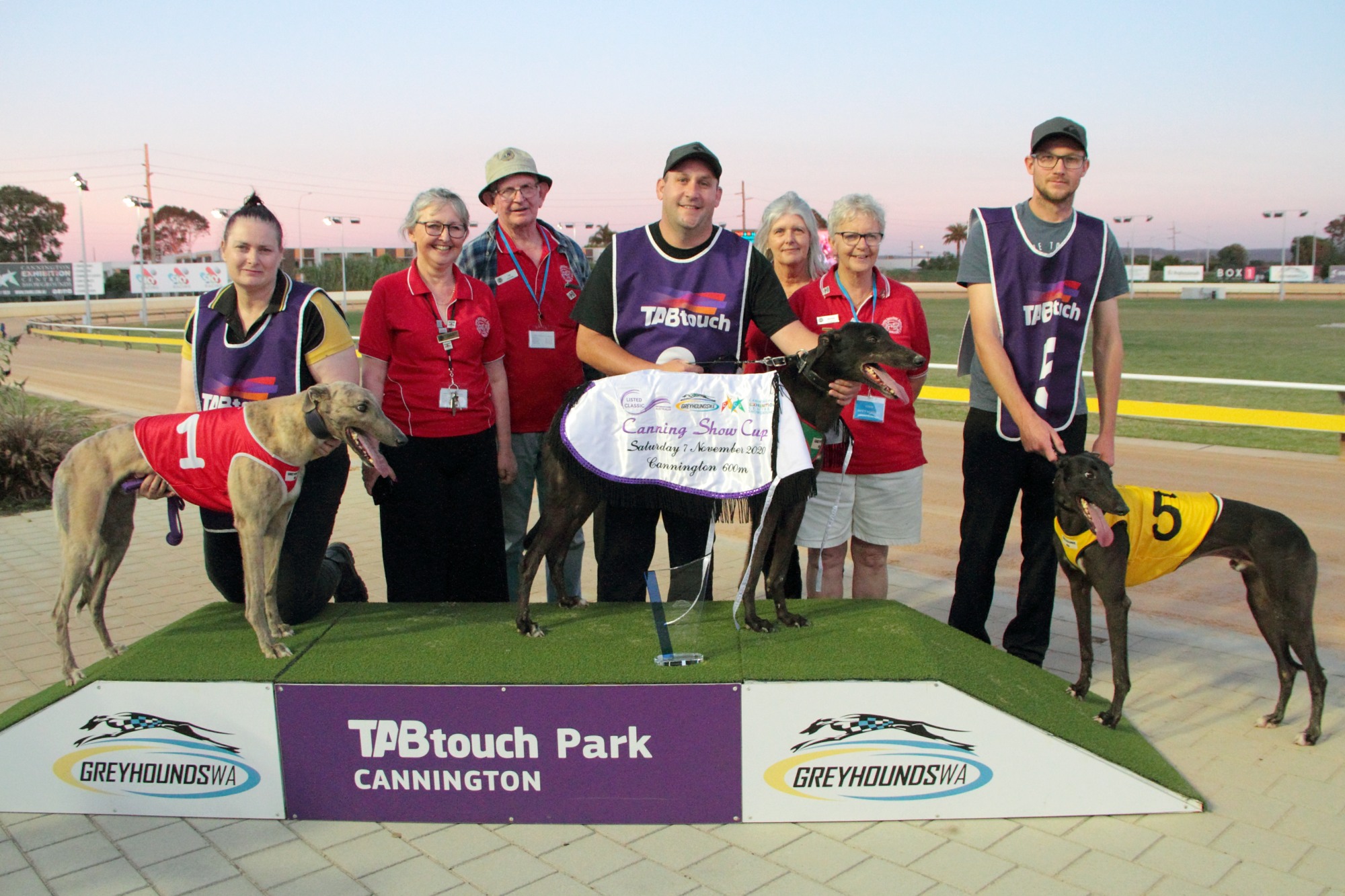 VAN BUREN (Bella Infrared- Benita Bale) exploded over the top of his rivals to score a last stride win in the listed Canning Show Cup for trainer Jamie Marsh. With the race favourite Flake Monelli getting checked on the bend start corner, the big black dog was well back early before showing his strength claiming the leader Chimera Monelli on the line scoring by a neck in 35.18. The win is his 10th from 30 career starts and takes his stake earnings past $60,000.

SUNSET TOXIC (Mepunga Blazer- Sunset Jessie) showed speed from box 6 and raced clear to win the opening heat of the Gr 3 Young Stars Classic by 6 1/2 lengths from the Oaks winner Cobargo in 30.02. The David Hobby youngster has now won at his past 3 starts.

WICKED RHYTHM (Fernando Bale- Velucci) showed speed from box 2 and with trouble behind her along the back straight, the Enzo Crudeli trained youngster raced clear for a 6 3/4 length win in the second heat of the Young Stars Classic. The black bitch has won her past 3 starts also and 5 of 11 in her short career.

SUNSET SPITFIRE (Mepunga Blazer- Sunset Jessie) had to over come some mid race trouble before keeping his unbeaten record in tact in the final heat of the Gr 3 Young Stars Classic. The David Hobby trained youngster pushed through along the rail going down the back straight before defeating Stargazer by a nose in 30.01. 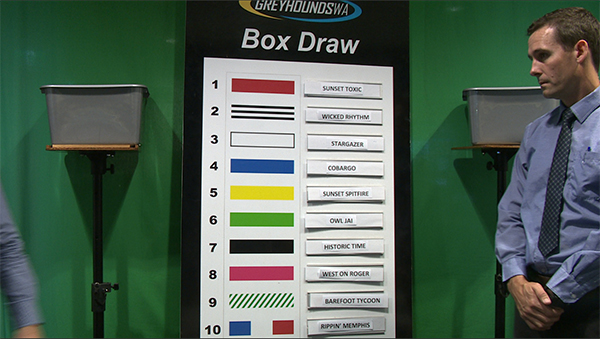 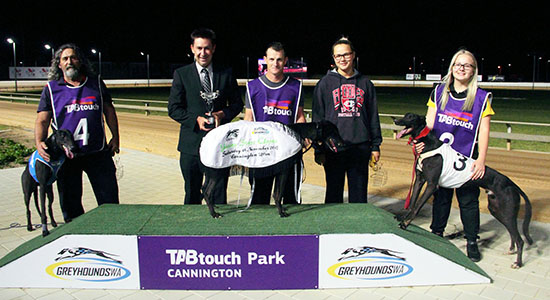 MANDJOOGOORDAP (Collision- Ritza Night) scored an all the way win in the Gr 3 Greyhounds WA Young Stars Classic Final. The Paul Stuart (pictured) trained bitch led from box 5 and then held off the late challenge from Black Bombshell and West On Charlie to win by a half head in 30.05. The black bitch was having just her 6th career start where she has won now 4 times nad she finished second on the other two occasions.

BUNDLES GALORE (Dyna Nalin- Saving Bundles) joined the leader Trouper Monelli down the back straight before drawing away to win by 2 3/4 lengths in a PB 29.67. The Enzo Crudeli trained dog has now won 4 of his past 5 starts. Crudeli trained an early winning double and is within 5 winners of Chris Halse in the leading trainer of the year award at Cannington.

RUBY’S CHAPTA (Magic Sprite- Ceejay Shambi) caused an upset in winning the FFA after leading throughout from box 1. The Graham Ellis trained bitch has been racing up in Grade in recent starts and held off an unlucky favourite Neil Monelli by 3 lengths in 30.09.

VICTOR METTI (Djays Octane- Giacometti) returned to the winners list after a run of placings, scoring by 2 3/4 lengths in 30.18. The Michael Johnston trained dog hadn’t won since June, however has recorded 11 career victories from 69 starts for his connections.

LIMITLESS (Barcia Bale- Bronelly Dancer) recorded his first win in WA and gave trainer Michael Johnston a race to race winning double. The former eastern states trained chaser had won 7 times in 21 starts prior to coming West. The black dog won by a neck in 30.21. 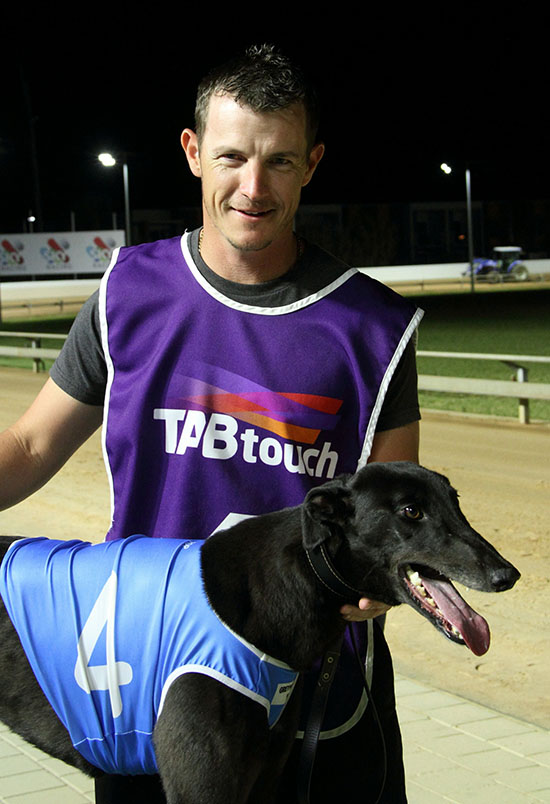 STARLIGHT ASHA (Cosmic Rumble- Starlight Delly) showed good speed to cross from box 8 and lead throughout over the 600 metres scoring by a neck over the fast finishing Neil Monelli in 35.10. The Linda Smithson trained bitch has now won 6 of 9 starts from box 8.

WEST ON AUGIE (Fernando Bale- Te Amo) was able to lead throughout in the opening heat of the Gr 3 Young Stars and score his second win in 3 starts. The Chris Halse trained youngster, who doesn’t turn two years of age until February, held off the more experienced Backpacker Jack by 1 1/2 lengths in a PB 29.91.

MANDJOOGOORDAP (Collision- Ritza Night) jumped well from box 4 and led throughout holding off the challenges from race favourite Black Bombshell to win by 1 1/2 lengths in 30.05 in the second heat of the . The Paul Stuart trained youngster has now won 3 times from just 5 career starts, finishing narrow seconds on the other two occasions.

WEST ON CHARLIE (Kelsos Fusileer- High Recall) worked through the trouble on the first corner and set out after the early leader Nice Garry to claim the final heat of the Gr 3 Young Stars for trainer Chris Halse. The black dog has now won 3 of his past 4 starts entering the final next Saturday night. Halse has combined with partner Linda Britton to win the series 4 times in the past.