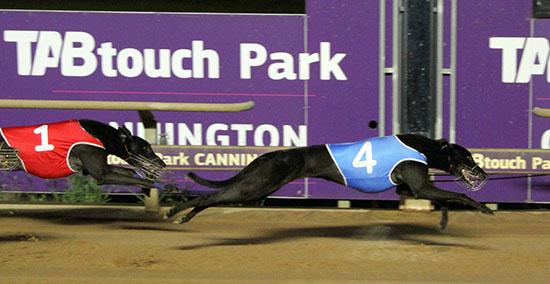 “Destroyer wins staying Free For All for Chris Halse”

Ex-Victorian based stayer Destroyer put in a solid performance this evening when he took out the 715m Free For All. Odds-on favourite Scott Keeping began only fairly from box two and was headed off at the first turn by Destroyer from box six. The son of Spring Gun soared clear with a lap to go and established a five length lead over kennel-mate Ramifications who was the closest pursuer. Outsider Chezzy Allen raced in third position ahead of Scott Keeping who began to build some momentum. Turning for home it was clear that Destroyer was going to lead all the way and while Scott Keeping rallied late he was beaten four lengths. Ramifications was another two lengths away third in advance of Chezzy Allen (fourth) and Moment To Jive (fifth). Destroyer was having his second start in WA after finding early trouble and running sixth over 520m. The Neil Young owned chaser has now started 46 times for 9 wins, 23 minor placings and over $64,000 in earnings. 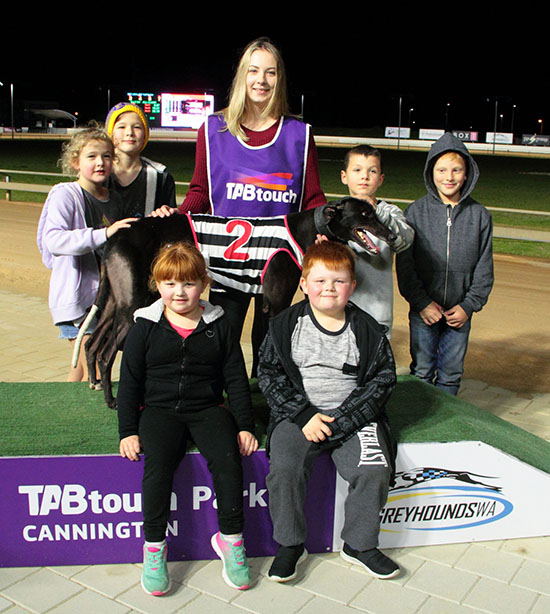 SCOTT KEEPING (Bekim Bale- Kim Keeping) made a mid race move to the lead and quickly put lengths on his rivals as they entered the back straight. The new purchase for trainer James Jeffries and his partner Gemma Jovanovic has now won at his past two starts over the 715 metres. The pair combined earlier in the night to win with Dave’s Entity who recorded a 4 length win over the 380 metres in 21.92.  Pictured : Scott Keeping

EGYPTIAN PIRATE (Where’s Pedro- Little Egyptian) ran home well late to score a neck win over Tallulah in a busy finish over the 600 metres. The former NSW chaser is now in the care of trainer Ricky Valenti and stopped the clock at 35.38. The white and black dog was a winner at Richmond prior to coming West.

CROPDUSTER (KC And All- Sialia) led throughout in the opening heat of the Westchase series scoring by 5 lengths in a PB 29.91. The Paul Stuart trained bitch has won 5 of her past 6 runs including the Gr 2 WA Oaks in May. Owner Peter Cameron also part owns Vanderworp who took out the Gr 2 Bendigo Cup the previous night. 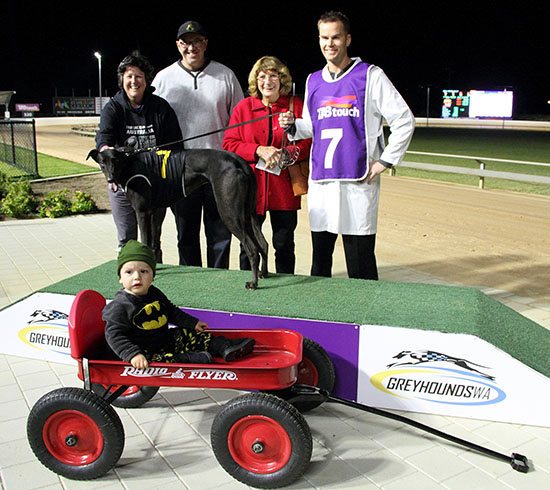 The Westchase is a WA Bred series that was first run in 2001 when Grey Draught won for Jodie Harding. Notable winners since include Daring Display (2003), Swift Sphinx (2006), Delaque (2010), Meroslava (2013) and Times Square (2016). Tonight noted strong finisher West On Hawkeye overcame box five and a tardy start to take out this year’s edition of the Westchase Series. Favourites Yuup (box one) and Equanimity (box three) matched strides into the first turn but Yuup who had the inside advantage was checked from behind. He lost momentum and caused interference to many, including himself. When outsider West On Beth left the rail at the first turn West On Hawkeye swooped. He charged through to take the lead and quickly established a four length lead. From that point he increased his lead to officially win by ten lengths. Infrared Moment finished second at huge odds ahead of fellow outsider He’s Historic. West On Hawkeye is trained by Chris Halse and returned $7.70 with the TAB and because roughies finished second and third the Trifecta paid $1295.60.

Race 4 Number 5 GOLD RESERVE : Put in a blinder to defeat Cobra Clutch and Sassy Ginger in 30.01. 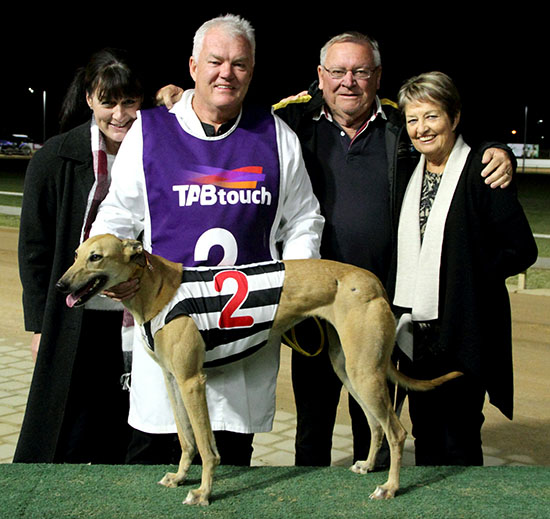 HONCHO MONELLI (Mogambo- Jackie Bale) was last away from the boxes, however weaved his way through the field before winning by 2 1/2 lengths in 29.92. The intelligent David Hobby trained dog has now won 12 times from 43 starts with many in the top company here in the West.

THAT DUDE (Lochinvar Marlow- Oxley Falcon) crossed from box 7 to lead throughout over the 520 metres, winning by 1 3/4 lengths over Wild Aaron in 30.07. The Sarah Appleton trained dog has in a purple patch of form in May before finding trouble at his past 3 runs.

SASSY GINGER (Kinloch Brae- Sassy Guess) continued his dominance on the track with an all the way win over Cobra Clutch winning by 1 1/2 lengths in 29.76. The Enzo Crudeli trained dog recently won the Gr 2 WA Derby and Winter Cup. Cobra Clutch has now finished second behind a Crudeli trained runner at his past 3 outings.

EQUANIMITY (Barcia Bale- She’s Historic) shot straight to the front and led throughout in the opening heat of The Westchase. The Enzo Crudeli trained dog has now won 4 of his past 5 starts and will head into the final as a leading chance again because of his early speed from the boxes. The Gr 1 Perth Cup winner has now won 13 times from 25 starts.

PYREDOS MONELLI (Bekim Bale- Luba Monelli) was able to work up to the leader Yuup going along the back straight before drawing away for a 1 1/4 length win in the second heat of The Westchase. With the race favourite Vanderworp missing the start, Yuup was able to lead before being claimed in a winners time of 30.05. 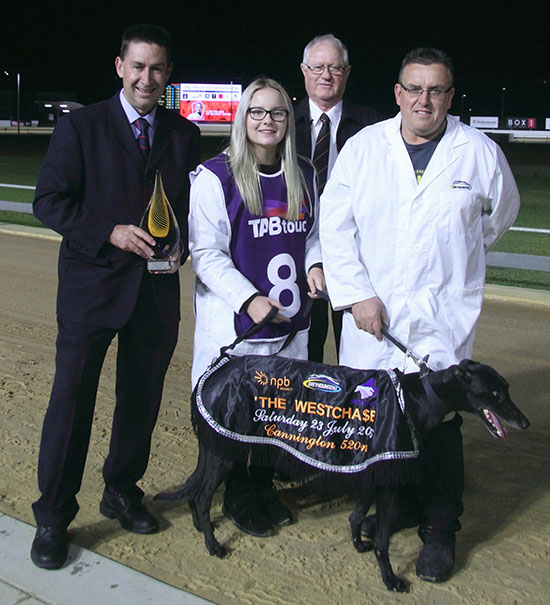 The Westchase Series is restricted to WA Bred chasers and notable winners have been Grey Draught (2001), Kickback Jack (2007), Delaque (2010) and Party Hotshot (2015). Tonight’s NPB Security Westchase Final field was choc-full of depth and whilst the favourites jumped from boxes 2, 3 and 4 the winner jumped from box 8. Litter sisters Pepper Fire (box 1) and Times Square (box 8) eyeballed each other at the first turn for Nambeelup trainer Chris Halse. Leaving the back straight Times Square assumed control and while the David Hobby trained Senator Monelli rocketed home Times Square scored by 2.25 lengths. Senator Monelli finished 4 lengths ahead of the fading Pepper Fire and favourites Gold Reserve and Shell Shocked finished off the podium.

RACE 6 NUMBER 4 SERENA FLY HIGH : Was a faultless all the way winner over 715m.