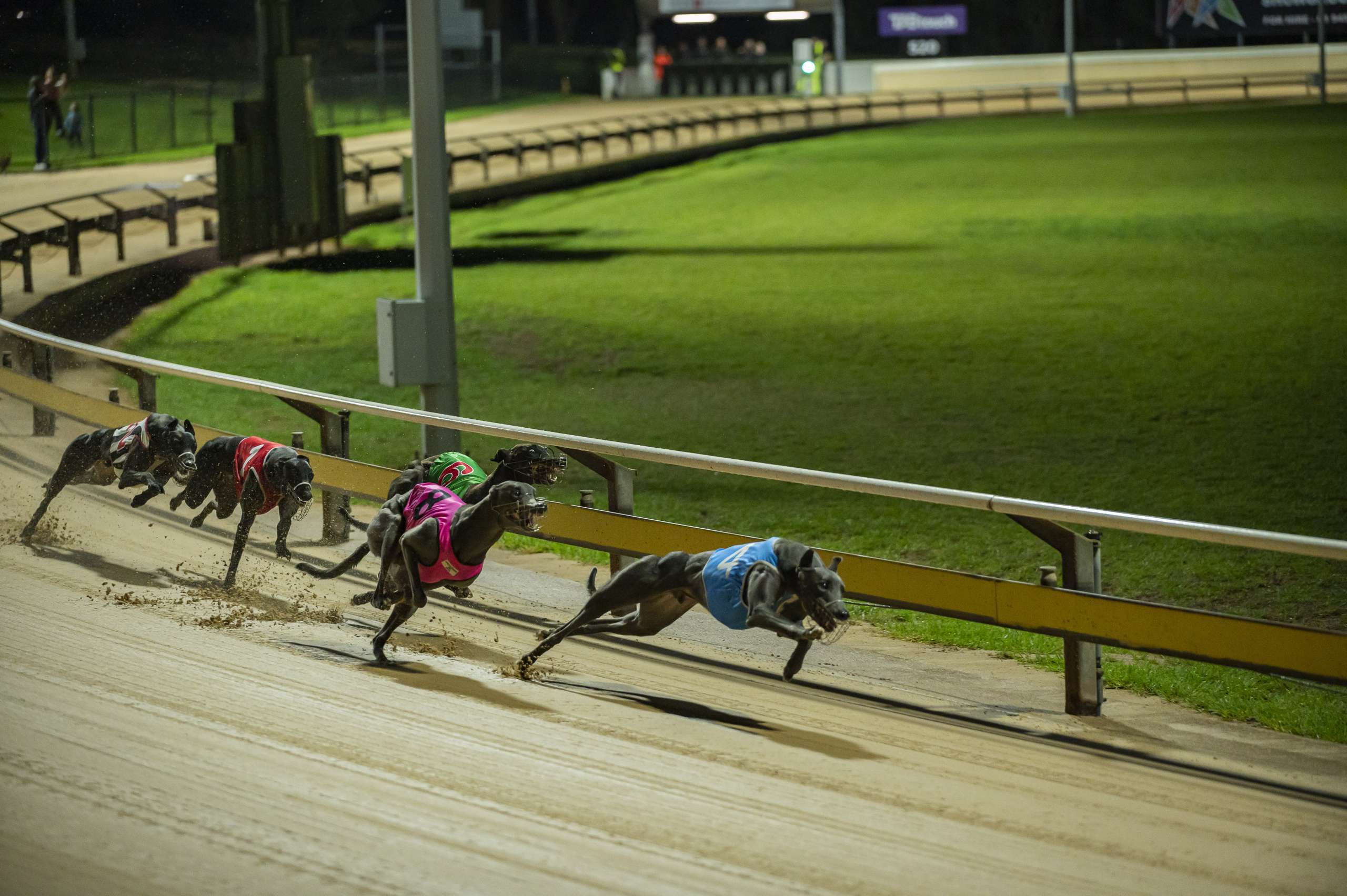 AERODYNAMIC GIRL (Fernando Bale- Cropduster) was able to lead early before being headed going off the back straight and then lifting for a very good win in 30.49. The Eric Campana trained bitch defeated her litter sister Safari Train by a length. The win was her third in 9 career starts.

KAPITO (Vanderworp- Legit Boss) recorded back to back wins after leading from box 7 and defeating Poppa Monno by 4 lengths in 30.01. The win was the Margaret Hepple trained dogs 10th from 22 starts and his first in City Grade company.

WEST ON BRAE (Kinloch Brae- High Recall) was able to cross from his wide draw and with the odds on favourite Momentum held wide, the red brindle dog was able to lead throughout and win by 1 3/4 lengths over Rippin’ Tomahawk in 30.35. The Chris Halse trained dog had been placed twice behind Momentum in recent starts. 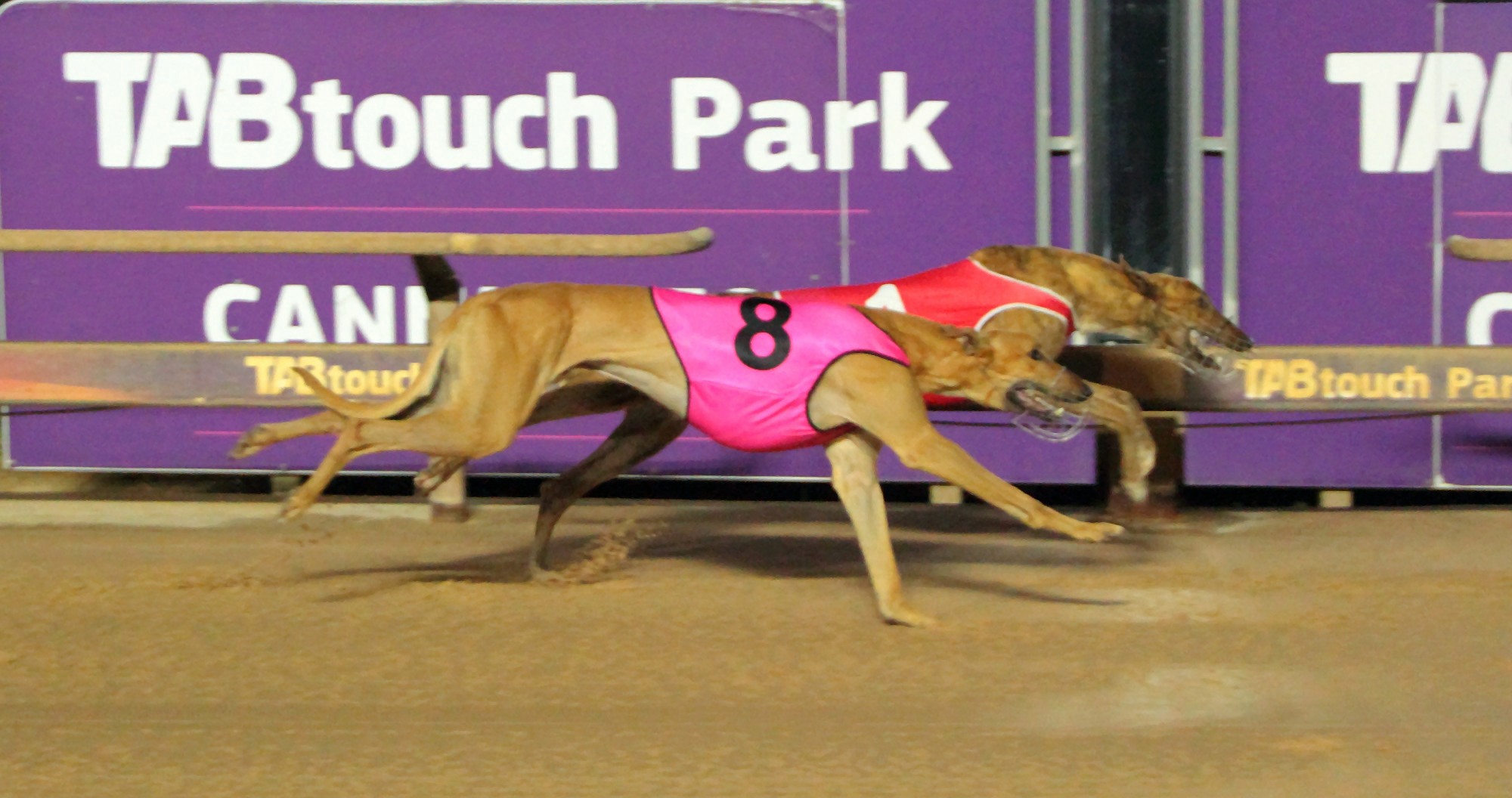 CATCH THE THIEF (Aussie Infrared- Dundee Ally) dominated the opening heat of the Gr 2 Britton’s Formal Wear WA Derby with a 5 length win over Chimera Monelli and Buster The Brute. While the Victorian missed the kick then bumped with Chimera Monelli, the Matthew Clark trained dog barged through along the fence and then put lengths on his rivals. He stopped the clock at 29.71, even after the bumps, and has now won 10 times from 17 starts.

TOMMY SHELBY (Fernando Bale- Serena Fly High) showed speed from box 3 and put away the second heat of the Britton’s Formal Wear WA Derby with a 4 1/2 length win over Fernando Star in 29.68. The Steve Withers trained star returned from injury the Sunday before and won and will strip fitter going into next weeks Gr 2 final. The ‘people’s dog” has now won 11 times from just 13 career starts and over $93,000 in stakes.

REDCAP MONELLI (Fernando Bale- Serena Fly High) ran home strongly to claim the leader Aeroplane Eric and win the final heat of the Britton’s Formal Wear WA Derby. The David Hobby trained youngster was well supported and settled in third place early behind the Victorian trained chaser before unleashing along the rails in the home straight. The red brindle dog won by a neck in 29.68.

Box draw will be done by RWWA Grading Department Tuesday when fields are released. 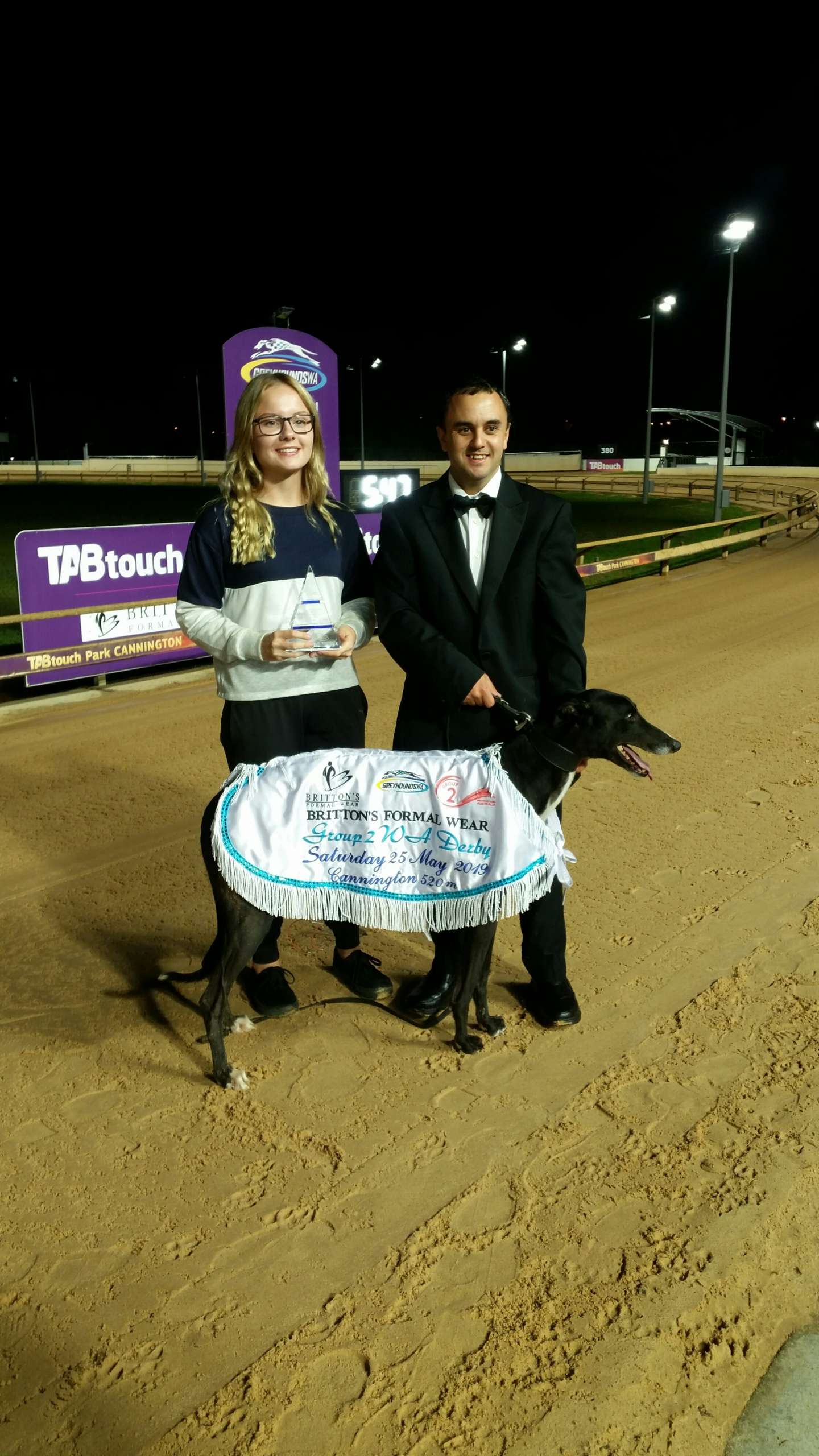 PREMIUM SHARE (Kinloch Brae- Shared Equity) demolished his rivals with a 9 length victory in the Gr 2 Brittons Formal Wear WA Derby final. The win gave trainer Chris Halse back to back wins in the Gr 2 final after West On Augie won last year. The well bred black dog has now won 5 times from just 12 starts and doesn’t turn two years of age until July. It’s a Storm, who led early finished second aged of Rockstar Beav in a slick 29.56.

CIRCLE OF DREAMS (Barcia Bale- Mepunga Mia) recorded a brilliant 4 length win in the opening heat of the Gr 2 WA Oaks. Now in the care of trainer Chris Halse, the Victorian owned bitch led into the first corner at her first look at the track before defeating fellow Victorian bitch She Will Bloom in 29.85. The Gr 1 and dual Gr 2 winner will take a power of beating in next weeks $60,000 final.

FANCY FRANCENE (Barcia Bale- Eyes Adorable) appreciated her look at the track the previous week as put paid to her rivals from box 1 in the second heat of the Gr 2 WA Oaks. The Chris Halse prepared chaser went 5.50 early before stopping the clock at 29.94, 2 1/4 lengths ahead of her nearest rival Banjo’s Girl.

KISS ME LINDA (Kinloch Brae- West On Bluebird) led throughout to win the third heat of the Gr 2 WA Oaks and give trainer wins in all 3 heats. The black bitch defeated Victorian raider Grace Ali by a half head in 29.93. Owned by the From the Jockeys Mouth syndicate, the little bitch competed in the GR 1 Perth Cup final earlier this year. 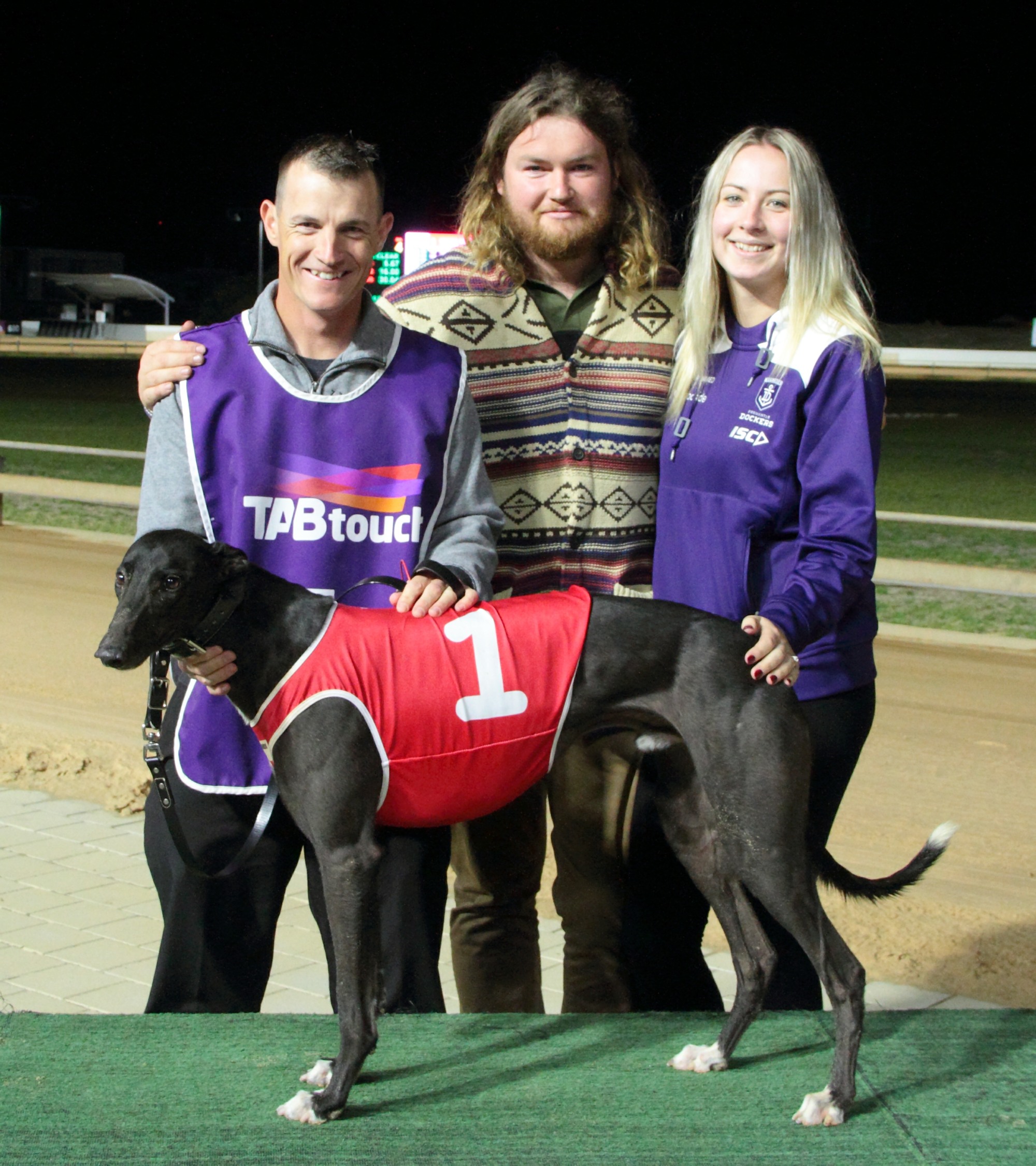 ROCKSTAR PATRIOT (Fernando Bale- Glory Of Love) recorded his first win since taking out the Gr 1 Sky Racing Galaxy in March. The Paul Stuart trained dog sat close to the leader Dyna Dean and worked to the lead going off the back straight. The black dog went on to win by 1 3/4 lengths over Reidy’s Runner in 42.09.  Pictured : Rockstar Patriot.

TANOAN CREEK (Kiowa Mon Manny- Brook Lee) caused an upset in the first leg of the Quaddie as he railed through to score by 2 1/4 lengths over Moto Doll in 30.26. The Colin Bainbridge trained dog had finished second behind Incredible Hero over the 600 metres at his prior run, however was sent out at the price of $40.90.

INCREDIBLE HERO (Barcia Bale- Oya Nine Wonwon) won the first heat of the Gr 2 Brittons Formal Wear WA Derby with a last stride nose win over It’s A Storm in 30.22. The win was an emotional one for trainer Fran Farrell and her husband Ben who has been battling Amyloidosis, an illness that requires regular chemotherapy treatment. The Harvey trainer will have her first Gr 2 finalist this week.

GOBLIN MONELLI (Magic Sprite- Jackie Bale) ran home well to defeat Magic Mamba who led early and the visiting NSW trained dog Rockstar Beav winning by 3/4 length in 30.04. The David Hobby trained dog had now raced since being unplaced in a heat of the Perth Cup in February and will strip fitter from the outing in next weeks Gr 2 final of the Brittons Formal Wear WA Derby.