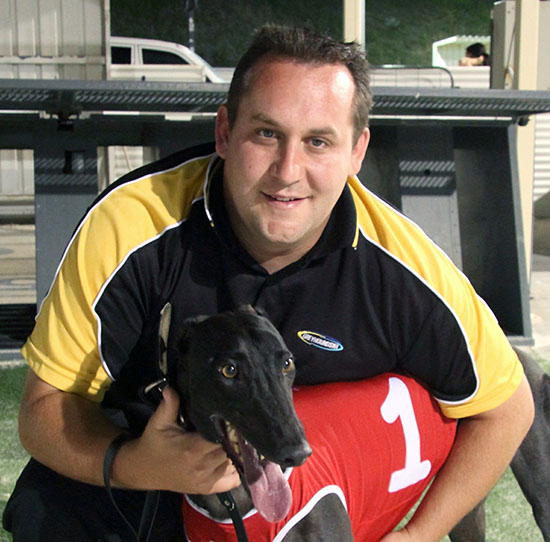 We caught up with Star Book trainer Jamie Marsh ahead of Saturday’s Puppy Classic Final. 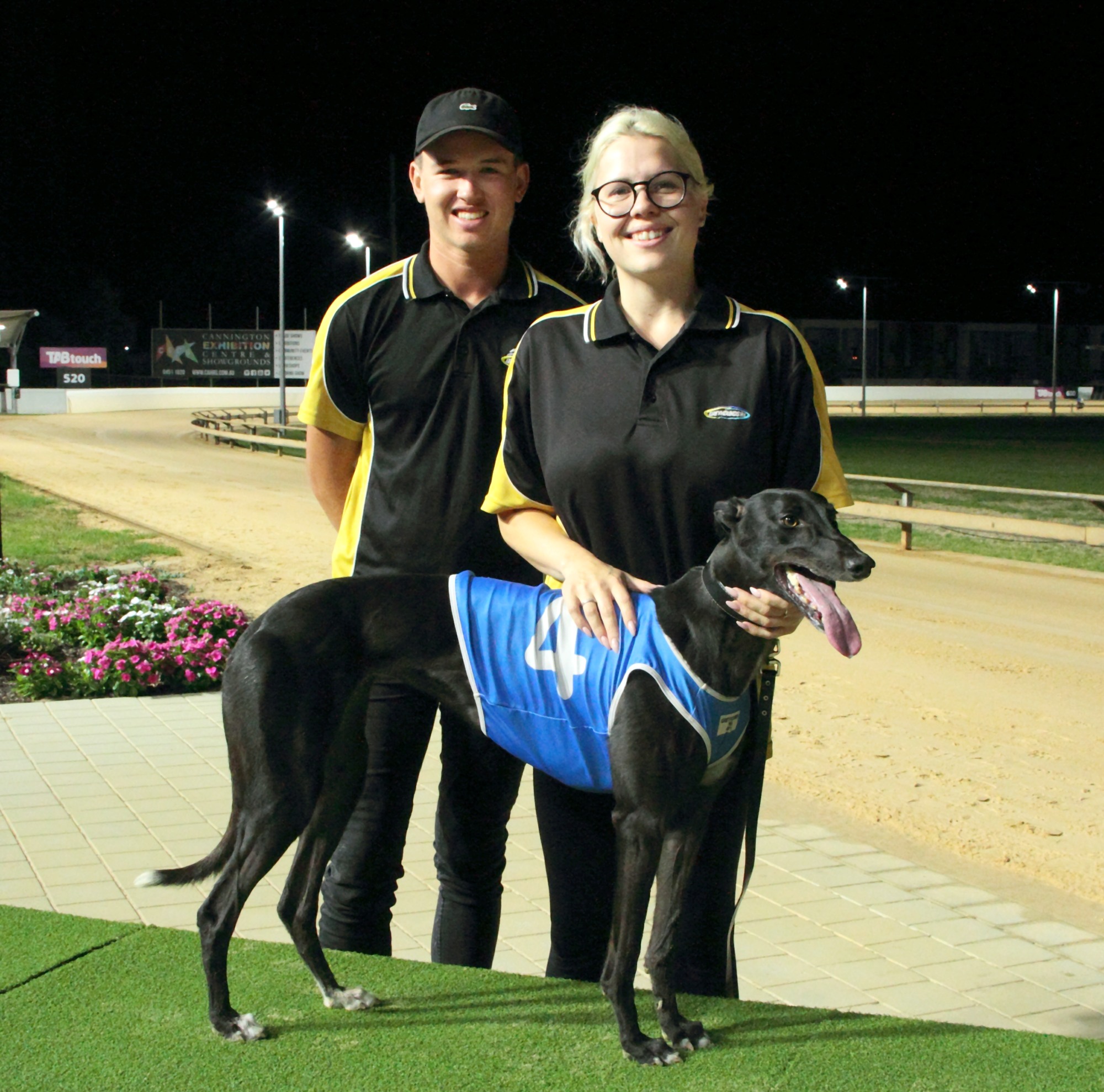 TOMMY SHELBY (Fernando Bale- Serena Fly High) was outstanding winning the opening heat of the Puppy Classic. Leading from box 6, the undefeated at Cannington pup raced past his inside rivals with ease and set up a margin along the back straight. The Steve Withers youngster went onto record a PB 29.58 defeating Zack Monelli by 4 lengths.

CHIMERA MONELLI (Fernando Bale- Sahannah Monelli) led from box 2 in the second heat of the Puppy Classic and was never threatened, scoring by 5 lengths in 29.68. Trainer David Hobby prepared the first 3 across the line with Sandman Monelli finishing second ahead of Kirra Monelli.

STAR BOOK (Barcia Bale- Saving Bundles) only recorded her first win at Cannington 3 days before, however the Jamie Marsh trained youngster was not fazed as she won the final heat of the Puppy Classic by 5 lengths over Werewolf Monelli in 29.74. The black bitch has now won at her past 3 starts after having won her Maiden at her 5th career outing. 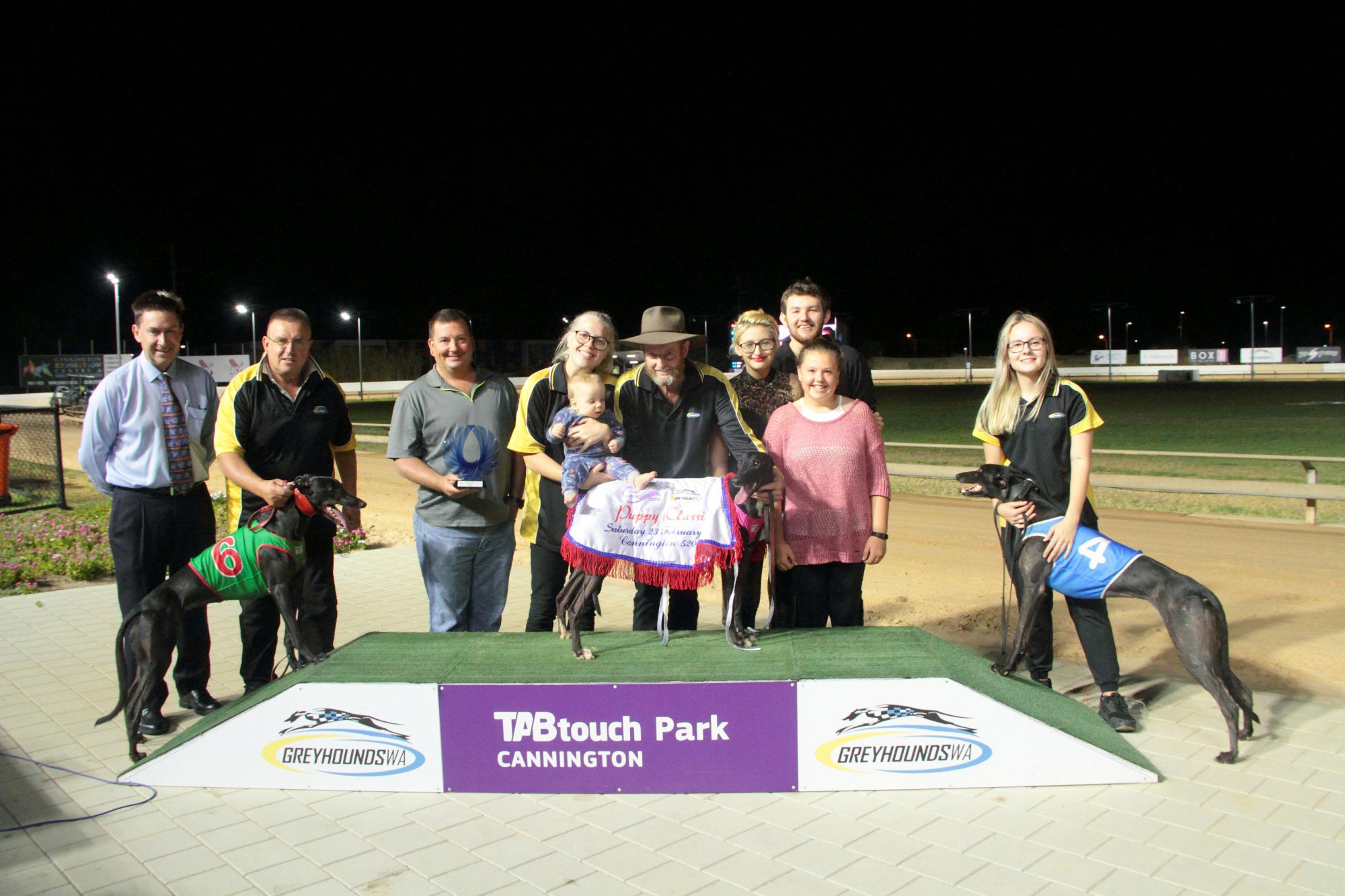 JADE’S BLADE (Kinloch Brae- Bluey’s Fate) crossed the field from her outside draw and then went on to score a 5 length win in the Listed Greyhounds WA Puppy Classic final. The Joe Dailly trained bitch had won 5 times from 14 starts and amassed $21,000 in stakes prior to her victory in a PB 29.96. The $20,000 first prize almost doubled her earnings and she also gains from being WA bred and hence gets bonuses.

REIDY’S RUNNER (Dyna Double One- Buxton Miss) sat in second place from the start and pressured the leader and race favourite Moment To Jive until they entered the back straight. At this point, the Christine Bennett trained dog, dropped off his rivals and went on to win by 4 lengths in 42.11. The black dog weighed in lighter at kenneling and this certainly looks to have the talented stayer primed for the upcoming Gr 1 Sky Racing Galaxy series in March.

DYNA DEAN (Kiowa Mon Manny- Prue Bale) missed the trouble as the runners entered the back straight and Leisel Monelli was dragged down from behind by Campini and fell. The Enzo Crudeli trained dog has been mixing his distances since coming across from Victoria and once finding the top tonight was able to race clear to win by 4 lengths in 30.12. 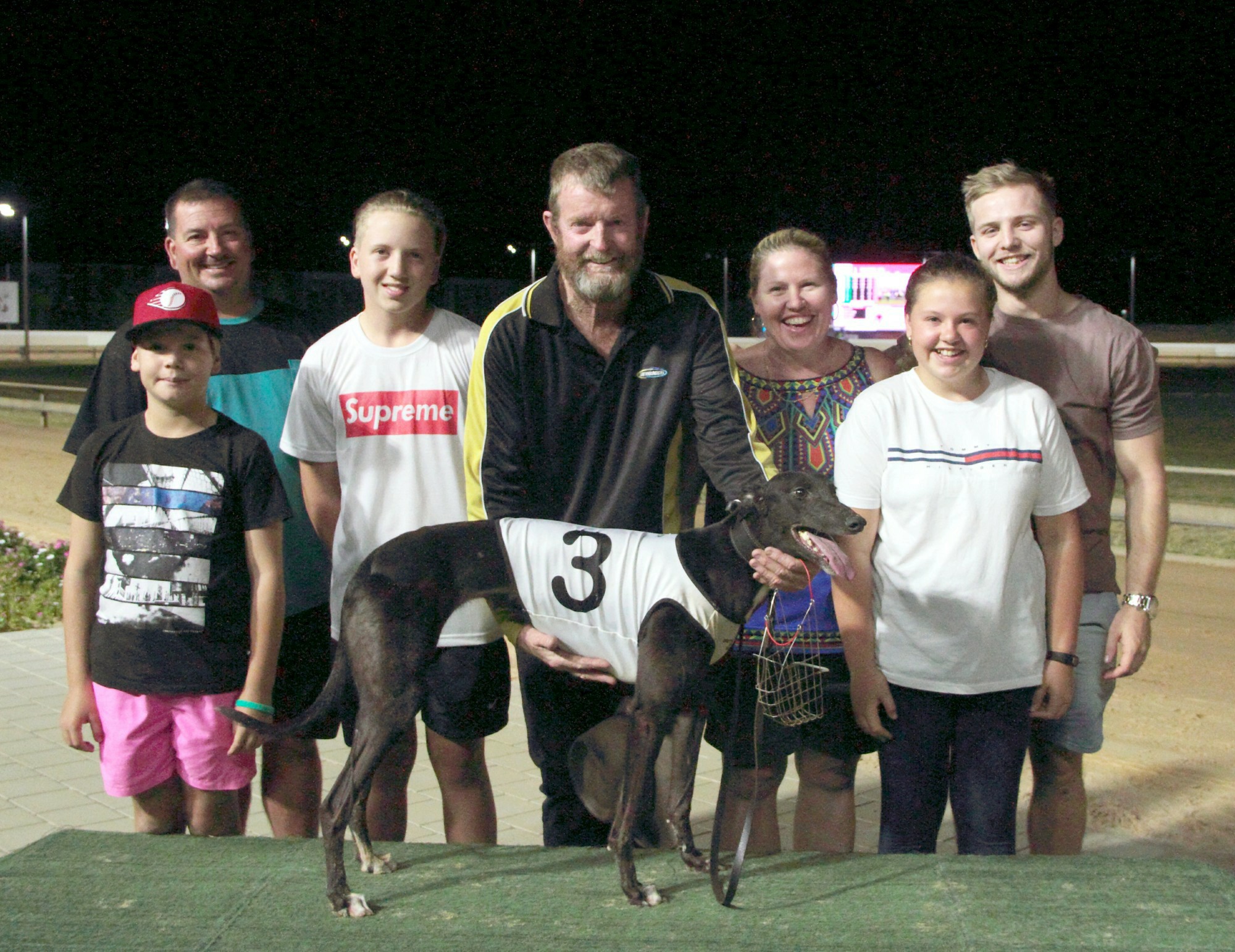 CAMPINI (KC And All- Fantastic Dotty) scored a PB time over the 520 metres after leading throughout from box 1. The Paul Stuart trained star held out Lhotse Monelli going into the first corner and then put lengths on his rivals. The white and black dog won by 9 1/4 lengths over West On Holly in 29.43.

LOVE ME TINDER (KC And All- Wired For Speed) recorded his first win at Cannington after 2 recent seconds and set a new PB 29.73 in defeating Rockstar Romeo by 9 1/4 lengths. The win gave trainer Paul Stuart an early winning double.

WEST ON AUGIE (Fernando Bale- Te Amo) had to overcome trouble before recording his 5th win in a row and his 29th career victory at his 50th start. The Chris Halse trained dog had to check off heels on the first corner and then raced clear to defeat Leisel Monelli by 2 1/2 lengths in 29.80. The week before on the arm he clocked 29.46. 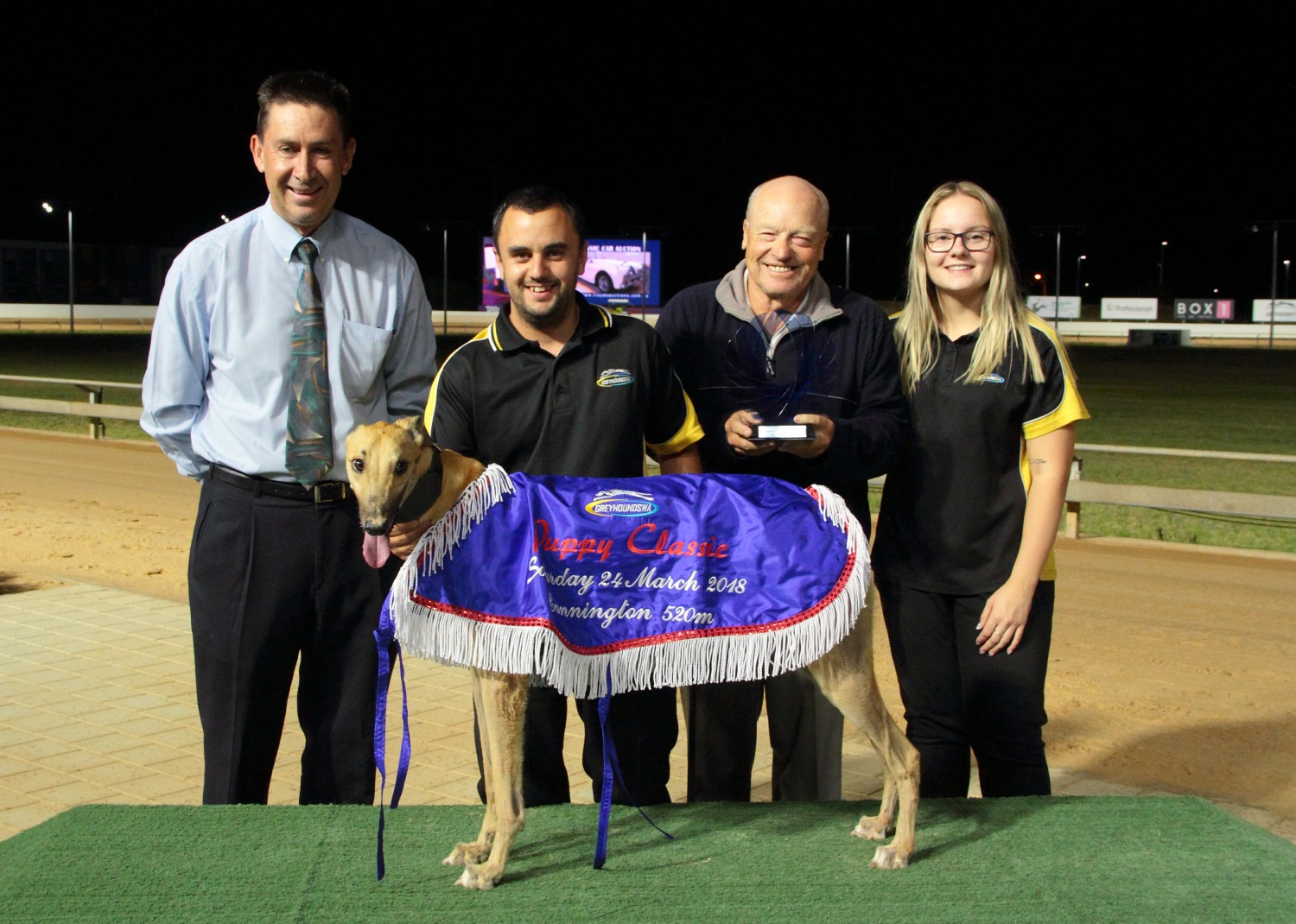 WEST ON AUGIE (Fernando Bale- Te Amo) had to over come a bump soon after the start which put the $1.20 favourite in all sorts of bother before racing to victory in the Greyhounds WA Puppy Classic final. The brilliant youngster usually leads, however had to chase down the leader Owl Perfect who gained a dream rails run with the other two major fancies bumping themselves on the first corner, costing themselves the race. The red fawn dog has now won 12 times from 18 career starts and $65,000 in stakes plus Westchase breeders bonuses.

BACKPACKER JACK (Cosmic Rumble- Serash Bale) jumped brilliantly from box 5 and led throughout to score over Starlight Asha in a PB 34.66 over the 600 metres. The Enzo Crudeli trained chaser has now won 5 times from 12 starts over the middle distance and looks  to step up to the 715 metres leading into the Gr 1 Sky racing Galaxy series on the 14 – 21 April.

ASTROZONE (Cosmic Rumble- Starlight Delly) led throughout from his favourite box 1 draw and recorded his 5th win from 8 starts from the red box. The Paul Stuart trained star clocked a slick 29.57 as he won by 3 1/2 lengths over Chezzy Allen. The fawn dog qualified for last years Gr 1 Perth Cup won by Equanimity and will be set for this years Gr 1 series in April.