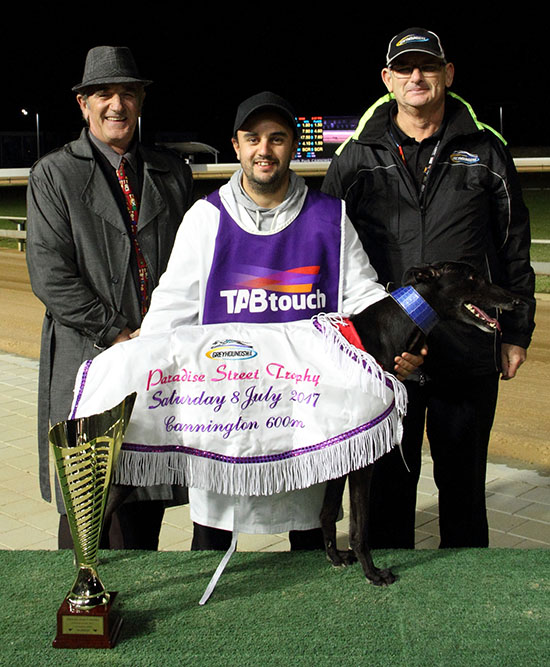 ART NOVEAU (Barcia Bale- Zelemar Fever) was able to lead throughout in the final of the Paradise Street Trophy defeating Ashton Monelli, turning the tables from her heat where she finished second behind him. The Chris Halse (pictured)trained bitch has shown her liking to the middle distance 600 metres at Cannington winning 4 times from 6 attempts over the trip. The black bitch has now won 10 times from 23 career starts. Pictured : Art Noveau

WILL KEEPING (Barcia Bale- Beth Keeping) showed speed for his new trainer Jamie Marsh from box 4 and put up a handy break going into the back straight before winning by 3/4 length over Jaycee in 30.46. Marsh took over the training duties from former trainer and owner Terry Erenshaw in mid June and was having just his 3rd start for his new kennel. The win was the blue dogs first since February.

EQUANIMITY (Barcia Bale- She’s Historic) bounced back into the winners circle after leading from box 1. The Gr 1 Perth Cup winner has amassed more than $213,000 in stakes plus close to $40,000 in Westchase bonuses being WA bred. The blue dog won by 2 1/4 lengths over former Victorian chaser who like Equanimity is trained by Enzo Crudeli.

TEDDY MONELLI (Mogambo- Jackie Bale) proved her class above the other WA stayers with a dominant all the victory over the 715 metres. The David Hobby trained black dog recently returned from a stint on the East Coast where he made numerous Gr 1 Finals in distance races against the likes of champion chaser Fanta Bale. Teddy Monelli has now won 20 times from 41 career starts. 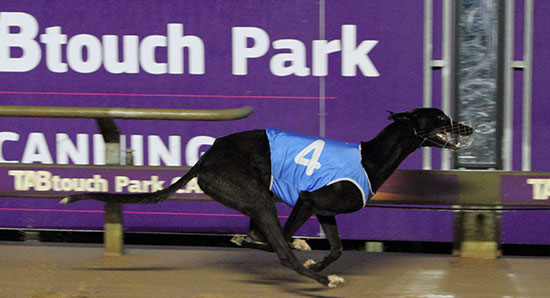 FOUND A DIAMOND (Turanza Bale- Miata) was impressive as he recorded his 7th consecutive win after overcoming trouble and winning by 3 lengths. The Paul Stuart trained brindle dog was beaten on debut before going on a 7 race winning streak. After being moderately away, he found trouble going into the first corner and then into the back straight before being smart enough to work his way to the lead.

ASHOM MONELLI (Mogambo- Jackie Bale) claimed the first heat of the Paradise Street Trophy when he railed strongly off the back straight to take the lead from Crashing Packs and go on to score by 4 lengths over Art Noveau. The David Hobby trained dog has now won 4 times from 5 starts over the 600 metres and clocked a winters time of 35.32 on a rain sodden track.
Pictured : Ashom Monelli

STRATOSPHERE (Djays Octane- Vegas Secrets) showed speed from box 6 and worked clear going off the back straight to win the second heat of the Paradise Street Trophy for trainer John Iwanyk. Iwanyk has won the final twice with Head Scene in 2001 and Kid Sloy in 2005. The fawn dog had been placed 3 times from 4 previous starts over the 600 metres and stopped the clock at 35.50, 3 lengths clear of Ess Bee.

OCHRE KEROMA (Spring Gun- Maya Keroma) was able to lead throughout in the third heat of the Paradise Street Trophy for trainer James Jeffries. With the two fancied runners Quick Jagger and Honcho Monelli bumping heavily at the rear of the field, the red brindle bitch was able to race away and win by 8 lengths over Victor Metti in 35.08.

FLYING EAMONN (Collision- Oshkosh Fayola) recorded his first win since coming across from th e Eastern States with a length win over West On Hawkeye and Teddy Monelli in 35.35. The Joe Dailly trained dog had won 7 times in Victoria prior to coming West where he was having his 4th start at the Cannington track.

EXPLOSIVE GAS (Fabregas- Ritza Night) broke through for his first win in WA for trainer Christine Robartson after holding up from box 1 and then holding off West On Maggie in the run to the line. Having won 4 times in Tasmania, the black dog won by a neck in 23.03.

ALL STRUNG OUT (Bekim Bale- Casey’s Angel) recorded his first win at Mandurah on debut at the track after leading throughout from box 1. The Chris Halse trained dog recorded a win in the final race at the old Cannington track at his previous start in June.

Race 4 No 4 Helmutt. Nearing a win at Mandurah after placings at her past two starts.