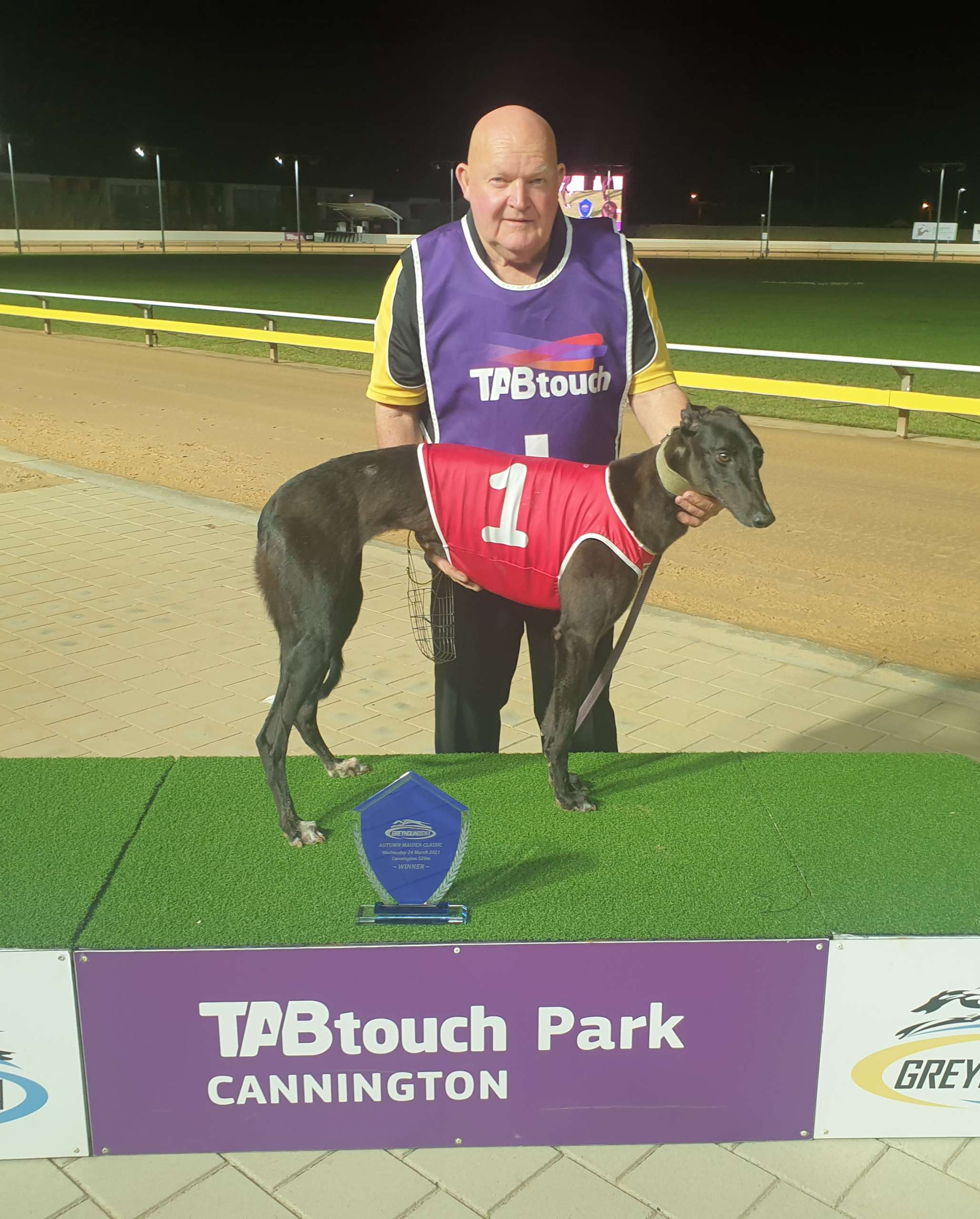 “We The People notches a hat-trick for Kavanagh”

Long distance chaser We The People overcame a moderate start to take out tonight’s Fuller Fitness Grade 5 over 715m. The former NSW chaser had won her previous two runs over 600m and after navigating her way through traffic hit the lead in the middle stages. The Michael Johnston trained Sweet Mamma Mia charged home late and took ground off We The People to finish second and two lengths behind. Finishing third after setting the pace was West On Mia who was placed for the sixth consecutive start. We The People is prepared by the Clark Kent lookalike Sean Kavanagh and has now started 14 times at Cannington for 6 wins and 5 minor placings.

Race 5 Number 2 CHIMERA MONELLI : Ran on strongly to be the runner up in the Lew Dorsa behind kennelmate Stout Monelli. 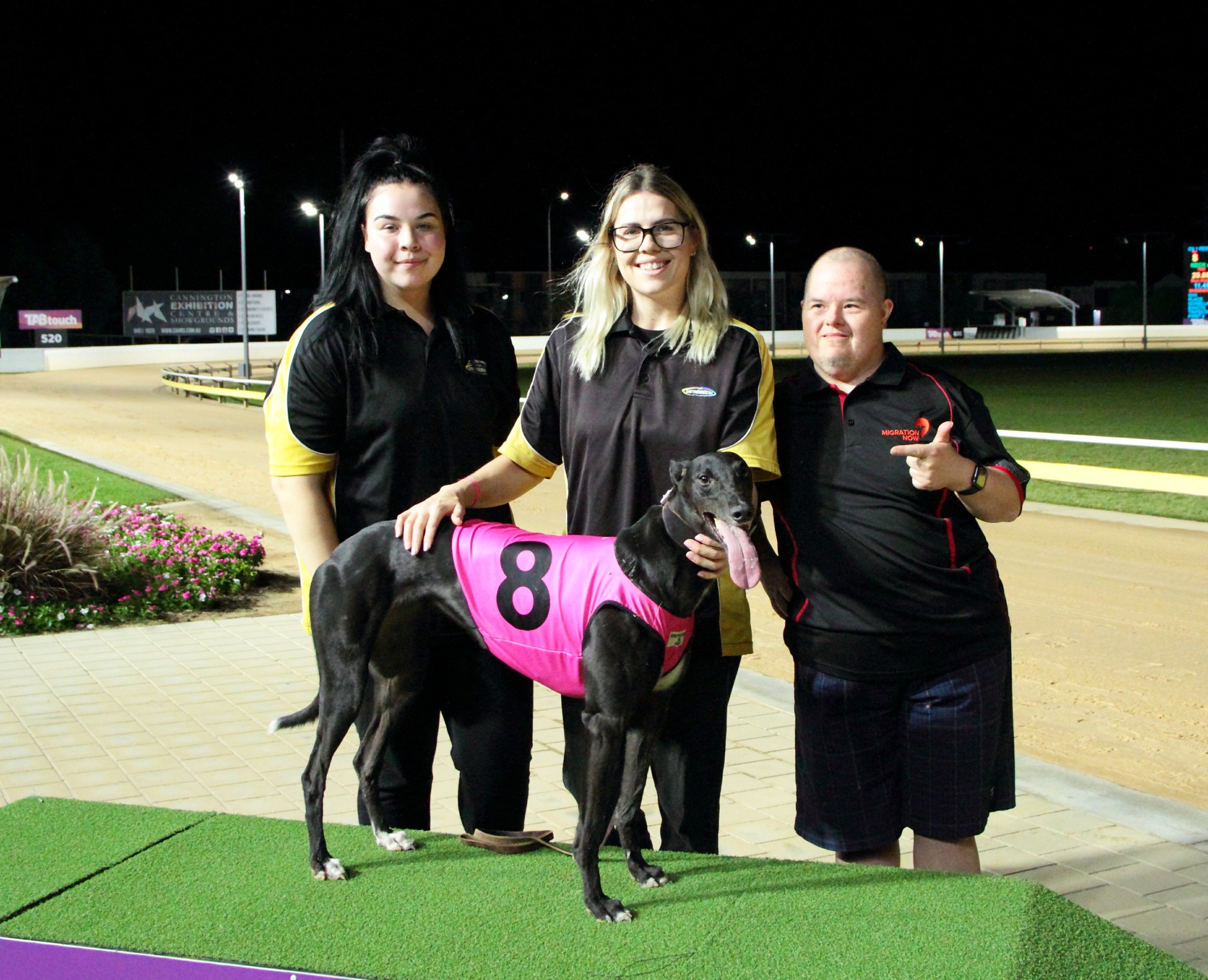 JIMMY GOAT ROSE (Bernardo- Dash Of Rose) led from box 1 and with trouble behind him going off the back straight, the fawn dog raced clear to win by 8 1/2 lengths in 22.01. The Glen Price trained dog  was well supported after gaining a start as a reserve runner and has now won twice from 6 starts since arriving from Victoria.

FABRIOLA CITRUS (Allen Deed- Fabriola Allen) caused an upset when she recorded her first win over the 520 metres at her 11th attempt. The Joe Dailly trained bitch had met all sort of trouble since winning over the 380 metres in 21.83, 5 starts earlier. The black bitch defeated Ready For Magic by 3/4 length in a PB 30.06.

CINDY’S OLIVER (Fernando Bale- Claretown Cindy) returned to the 715 metres for the first time since the middle of last year with a 2 length win over Jayville Slick in 41.82. The Joe Dailly trained dog was having his 50th career starts and he has saluted first 19 times and has won close to $150,000 in stakes. The black dog is being set for the Gr 1 Sky Racing Galaxy with the heats on Saturday April 10.

STAR BOOK (Barcia Bale- Saving Bundles) flew home to claim the leader Withers Monelli near the line and win the opening heat of the Lew Dorsa Memorial. The Jamie Marsh trained bitch has now won 4 of 6 starts from box 8 and has won 20 times overall from 41 career starts. The black bitch won by a neck in 29.85.
Pictured : Star Book 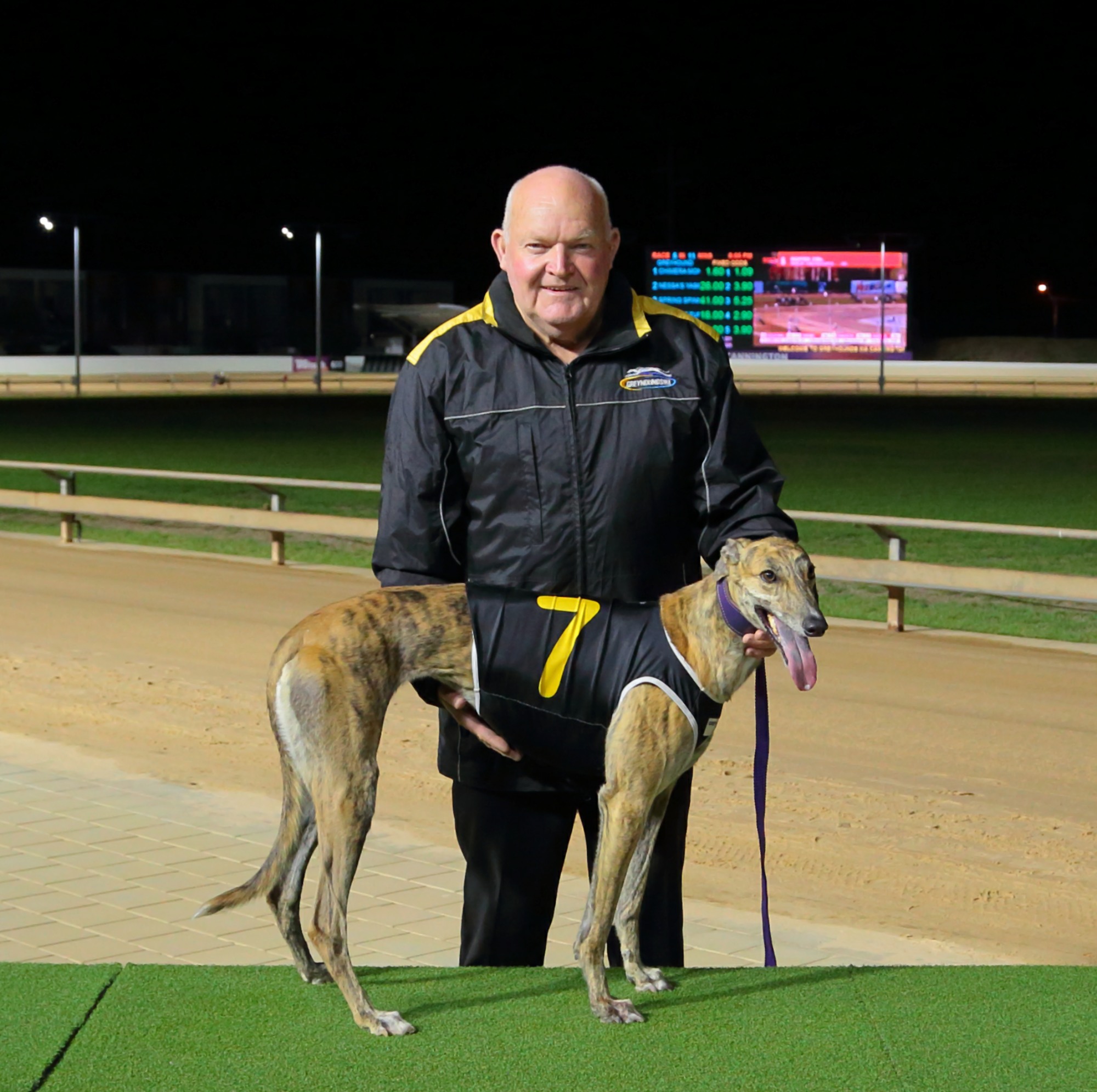 FLAKE MONELLI (Fernando Bale- Dyna Sandy) set a new track record over the 600 metres when she found the lead from box 7 shortly after the start. The David Hobby trained star recently flew over the 715 metres in a heat of the Gr 1 Sky Racing Galaxy before running fourth in the final behind Rockstar Patriot. She was never in danger tonight winning by 9 1/2 lengths over Dyna Dean in 34.32 lowering the record of Petunia Monelli 34.49 set in October 2017 a month before Flake Monelli was whelped.

WITHERS MONELLI (Fernando Bale- Serena Fly High) dominated from the front, after being well supported by punters, and raced away fro a 4 length win over West On Axel in 29.95. The David Hobby trained youngster has now won 3 times from 20 career starts while being minor placed 9 times.

MORE MORE MORE (Barcia Bale- More In Store) led from box 4 for trainer Nat Crook and scored his first win over the 520 metres in a PB 30.04. The black dog has been racing well over the 405 metres giving Crook, who only recently was granted her trainers license, one of her early wins back in the middle of February.

CHEVY’S ENTRY (Unlawful Entry- Sticka Size) worked to the lead leaving the front straight and raced away to record his first win over the 520 metres at Cannington. The Shayne Williams trained dog had shown good form over the 380 metres, recently clocking a 21.74 winning time. 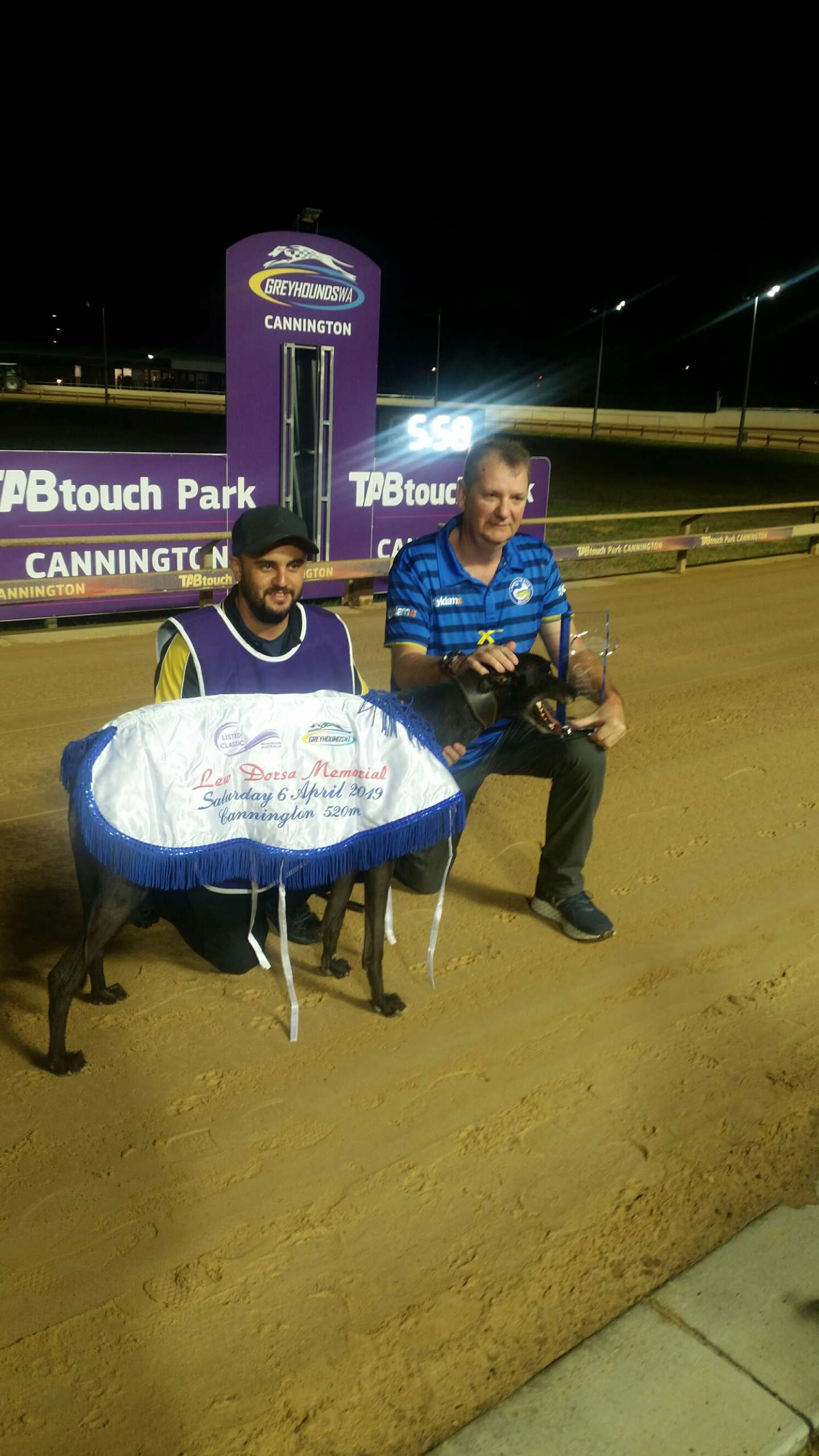 WISE RICCIARDO (Barcia Bale- Wise Penny) returned to WA and after 4 minor placings including a third behind West On Augie in the recent Perth Cup heats, the WA bred dog recorded his first feature race win and his first at Cannington in the final of the Greyhounds WA Lew Dorsa Memorial. The Chris Halse trained dog jumped well from box 7 and with clear galloping room was able to find the top before scoring by 3 lengths over Snazzy Whompo in 29.95. Pictured : Justin Wright & Luke Townsend with Wise Ricciardo

PURE PROJECT (Awesome Project- Isadoll) recorded his second win at Cannington over the 520 metres after holding out a wayward Hello I’m Steelo in the run to the line. The Steve Withers trained dog was able to hold out the favourite Jade’s Blade in the run to the first corner and from there went on to score by a head in 30.30.

IT’S A BULL (Allen Deed- It’s A Wrap) recorded back to back victories at Head Quarters and his first over the 600 metres as he stepped up to the distance for the first time in WA. The Krystal Shinners trained dog was able to show speed from his outside draw and scored by 1 length over Not Available in a slick 34.83. 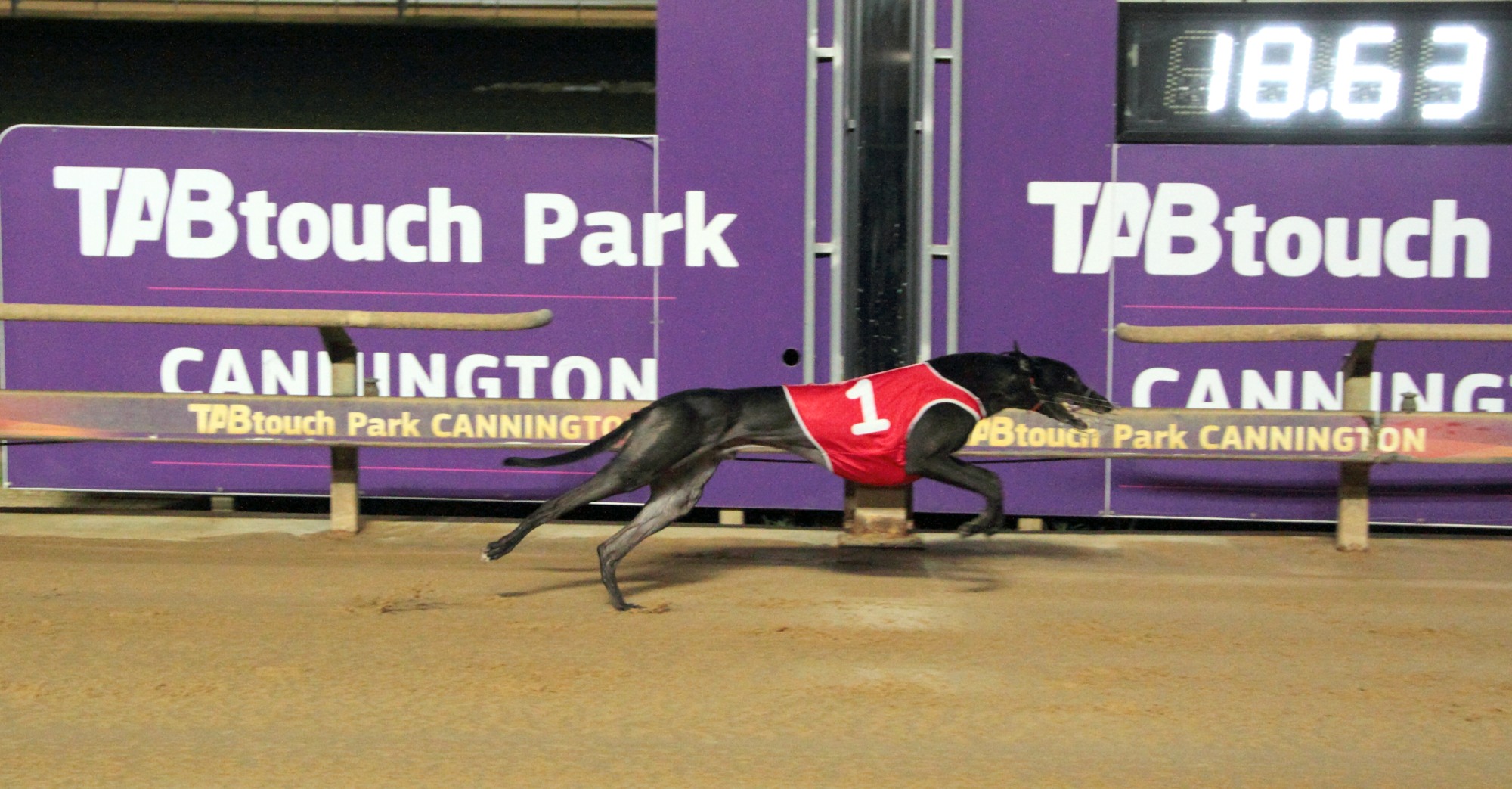 Hecton Bale will spearhead trainer Enzo Crudeli’s team of three chasers in the final of the Lew Dorsa Memorial (520m) at TABtouch Park Cannington on Saturday.

The classy veteran flexed his muscles with a commanding victory in 29.78 during his heat last weekend and now joins kennelmates Verne Allen and Snazzy Whompo in the trophy decider.

Hecton Bale will likely start as favourite but all three dogs have claims following a favourable box draw.

The Crudeli trio will occupy the first three alleys on the grid with Verne Allen in the pole, Snazzy Whompo next box over and Hecton Bale will launch out of three.

Given the other heat winner and main danger, Eighty Eight, has drawn awkwardly in box six the race has opened up for team Crudeli.

“I was joking before the draw that boxes one, two and three would be great so I won’t complain,” said kennel foreman Graham Crudeli.

“Our dogs are drawn to perfection.

“Hecton Bale should get a nice clear run to the corner but if either of the other two happen to be in front they’re both strong so they’ll be hard to run down.”

The Crudelis took a punt when they brought Hecton Bale over to WA late last year so they are understandably thrilled, not to mention a little relieved, to see the greyhound have success and have their investment pay dividends.

The 2018 Australia Cup winner was purchased along with several other high-profile greyhounds from the eastern states, including the likes of Verne Allen and Dyna Dean.

Hecton Bale was easily the jewel in the crown of that group despite the fact that he had been winless in his final six months of racing in Melbourne.

The speedy black chaser arrived here with a huge reputation but he had a slow start for his new kennel, producing a solitary win from his first seven starts.

“He came over with spilt webbing and was off for six weeks or so, which gave us the opportunity to put him to stud for a short stint,” Crudeli explained.

“When we put him back in work he trialled well but his first few races for us were sub-par.

“It wasn’t the start we wanted with him but he’s always had the ability and we knew it wouldn’t take him long to turn things around.”

Hecton Bale announced his return to form with an impressive win in a heat of the Perth Cup and then followed up with a very nice effort to finish second in the final behind Orson Allen.

“He’s raced against the best all his life so he knows what he’s doing,” Crudeli said.

“He’s pulled up (after the Lew Dorsa heat) a million dollars and is raring to go.

“He’s jumping out of his skin.”

Crudeli believes that Hecton Bale can hit some truly ominous form now that the greyhound is firing on all cylinders.

“Now he’s racing with confidence he should just get better and better,” Crudeli said.

“I think there’s more improvement in him and we should see the very best of Hecton in the next few weeks.”

The Lew Dorsa Memorial (race 5) is scheduled to jump at 8.32pm on Saturday night.