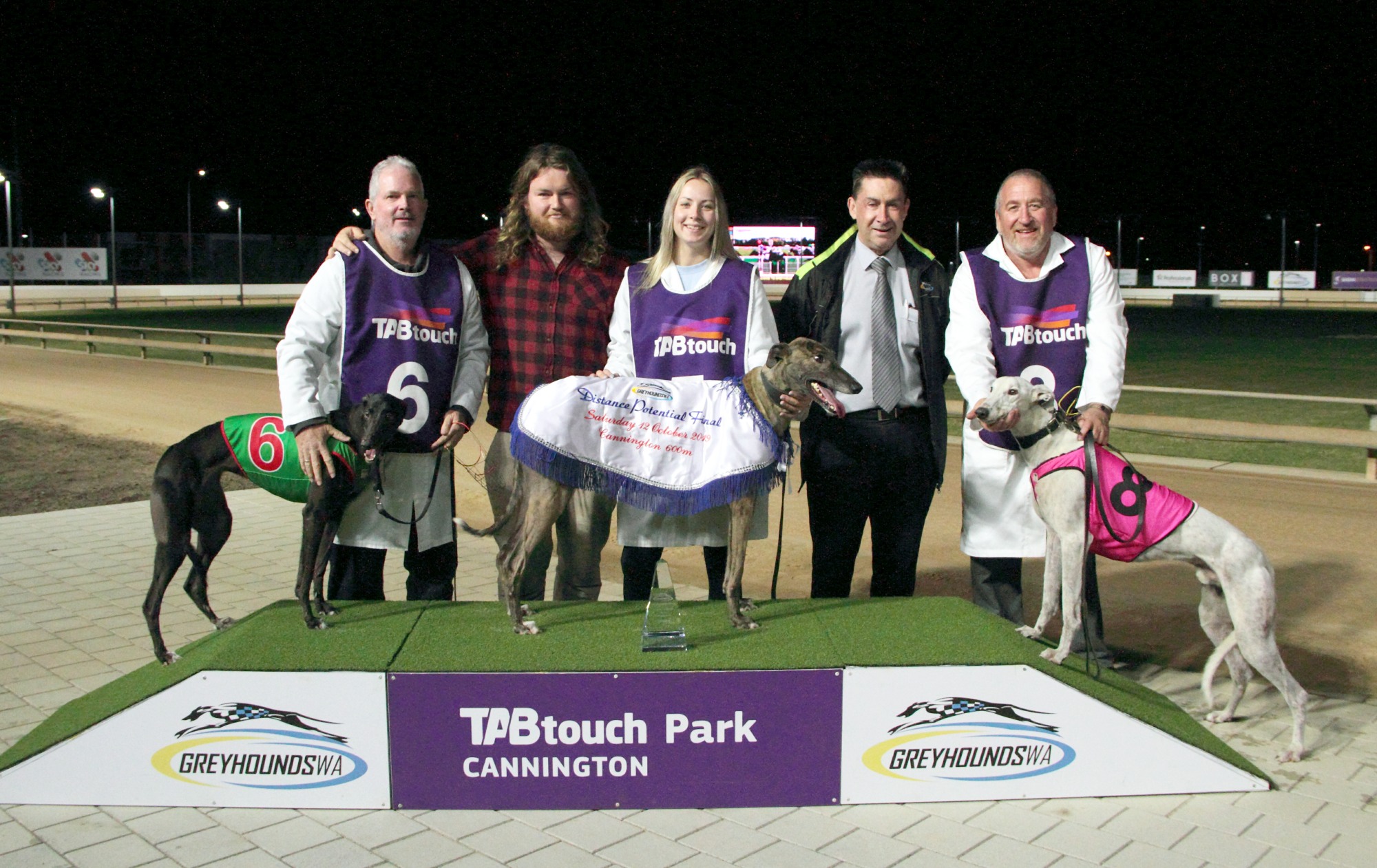 RAPPA FLASH (Kinloch Brae- Ash Flash) caused an upset in the final of the Greyhounds WA Distance Potential with an all the way win from box 5 over the 600 metres. The James Jeffries trained dog recorded his second win at Cannington from 13 starts with both wins coming over the middle distance. The brindle dog won by 1 1/2 lengths over Fantastic Ghost and Gran Amor in 35.08.

ROLO MONELLI (Fernando Bale- Dyna Sandy) recorded his second career victory when he raced past kennel mate Mercedes Monelli off the back straight before scoring by 3 lengths in 29.99. The David Hobby trained youngster had been racing without much luck before his clear run in the Novice over the 520 metres.

CAMPINI (Kc And All- Fantastic Dotty) returned to his brilliant best with a brilliant win after over coming numerous bumps in the early parts of the FFA. The Paul Stuart trained chaser settled midfield after a heavy bump at the start and then was bumped again on the first corner. Once into the clear, the white and black dog exploded out to claim the leader and kennel mate Slingshot Gypsy off the back before winning by 6 lengths in 29.72. 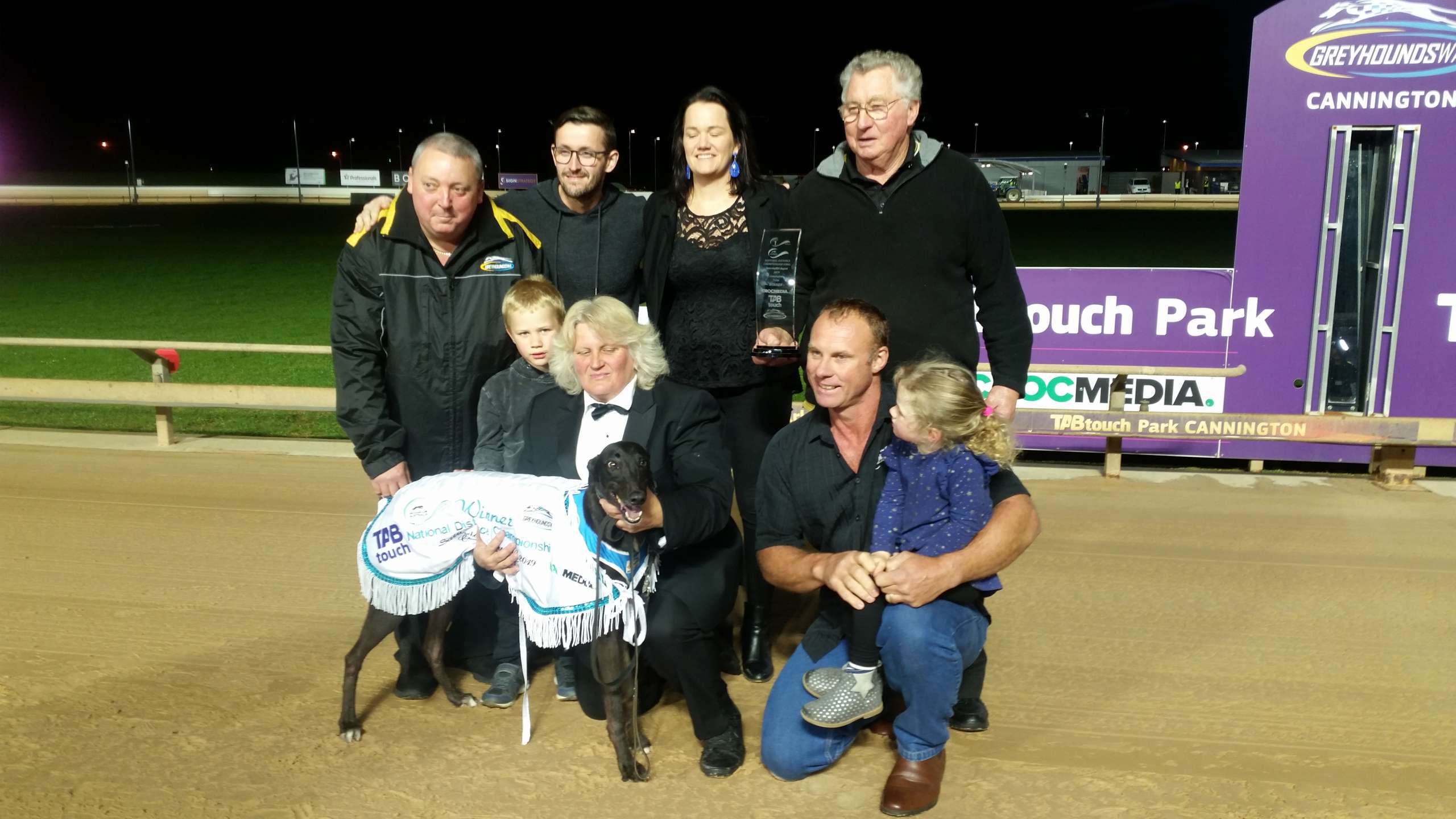 REIDY’S RUNNER (Dyna Double One- Buxton Miss) scored a brilliant win in the All New SEN APP National Distance Final, defeating Victorian champ Tornado Tears and NSW chaser Veloce Nero. The win gave trainer Christine Bennett her greatest win in the sport and her first Gr 1 victory. The win was also WA’s third win in the National Distance Final joining Paradise Street and Miata to have won the feature representing their states. The black dog settled close to the leader Bronelly Jacob and was too strong for Tornado Tears, who was held up going off the back straight, winning by 4 lengths in 41.76. Pictured: Reidy’s Runner

PREMIUM SHARE (Kinloch Brae- Shared Equity) is the Crocmedia National Sprint champion after running down the leader Good Odds Harada from NSW. The win capped off a glorious night for WA after winning the National Distance final earlier with Reidy’s Runner. The Chris Halse trained dog settled close to the leader and with Victorian star Black opium being checked on the first corner, the WA star raced to glory stopping the clock at 29.59. Halse won the Sprint title last year with West On Augie at Sandown Park. NZ representative Dyna Dave ran a very good race in finishing third for trainer Craig Roberts.

Finalists for the Peter Thomas this coming Saturday.

Not in box draw order. Box draw will be done Tuesday by the Grading Department. 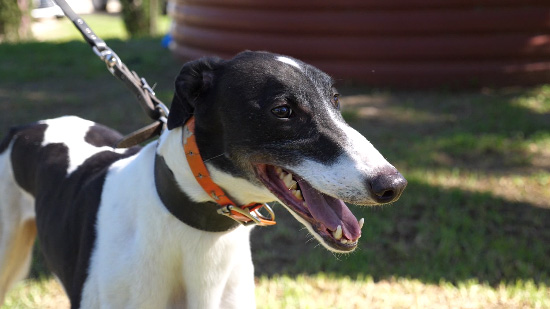 The Batman is back! Molly Haines spoke with Robert Britton, trainer of the mighty Tornado Tears, ahead of the All New SEN App National Distance Final. 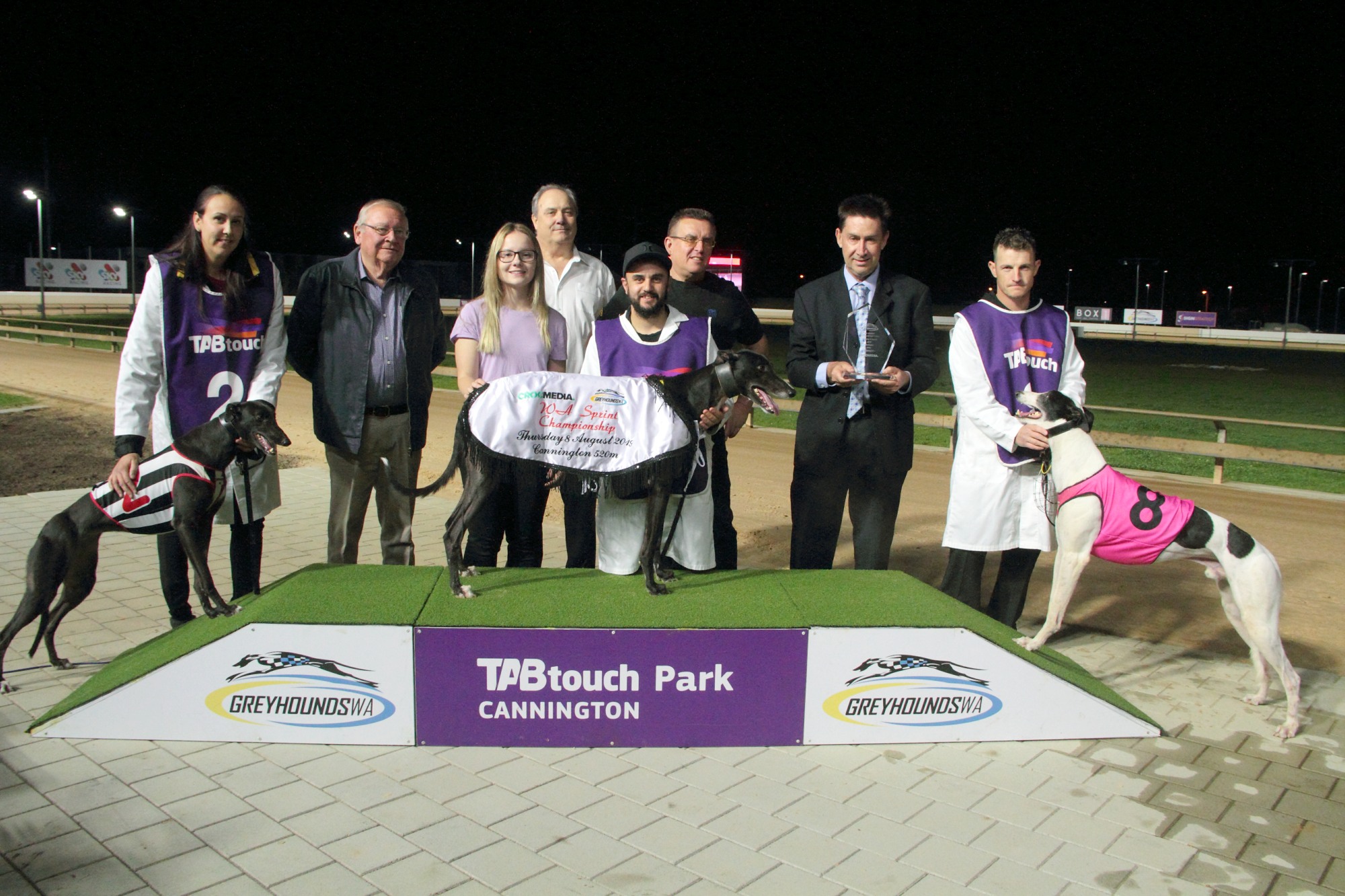 REIDY’S RUNNER (Dyna Double One- Buxton Miss) raced into the final of the Crocmedia National Distance with a dominant victory in the WA Distance final. The Christine Bennett trained dog settled just off the pace being set by Incredible Hero before forging to the front and scoring by 9 lengths over Back On Lava in 41.80. The black dog was having his 50th career start and has won 9 times over the 715 metres with a PB of 41.66 set in April this year.

PREMIUM SHARE (Kinloch Brae- Shared Equity) showed speed from box 5 and was able to find the lead entering the back straight before racing clear to win the Crocmedia WA Sprint final by 3 lengths over Starlight Yoyo in 29.66. The Chris Halse trained dog has won his past starts and has a PB of 29.56 set in May when winning the Gr 2 WA Derby. Having just his 22nd career start, the WA bred dog will represent WA in the Crocmedia National Sprint final on August 24. Pictured : Premium Share 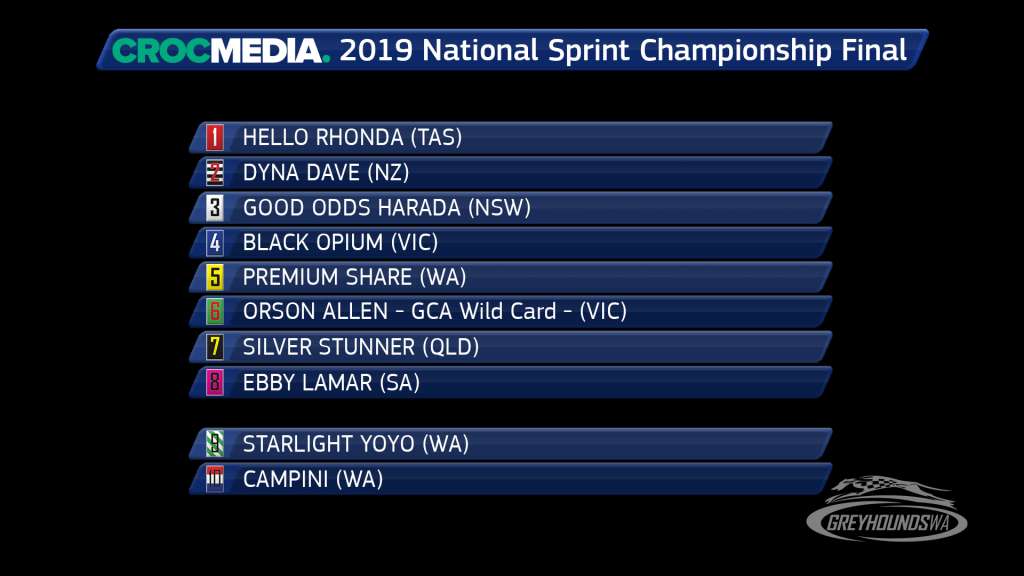 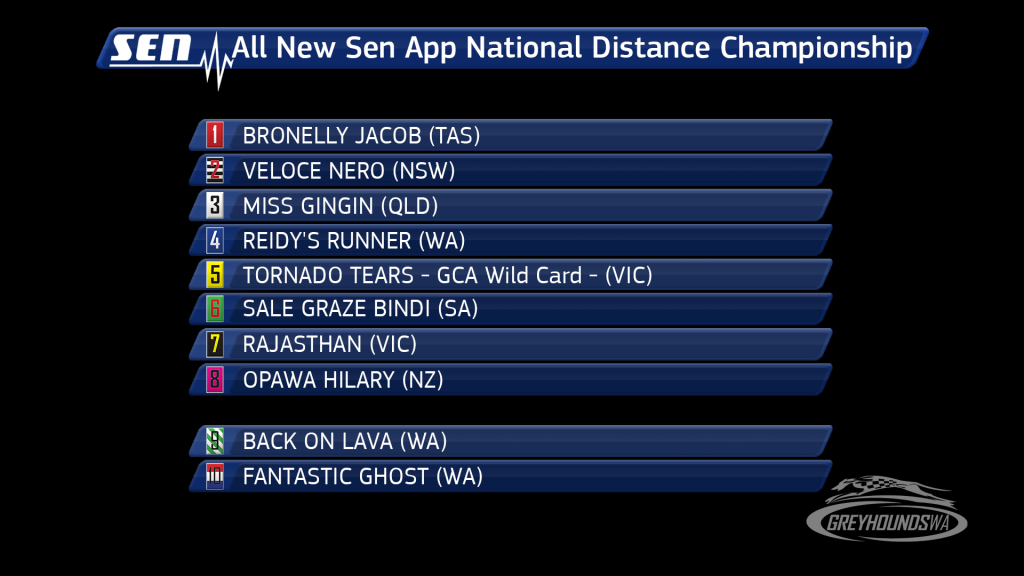 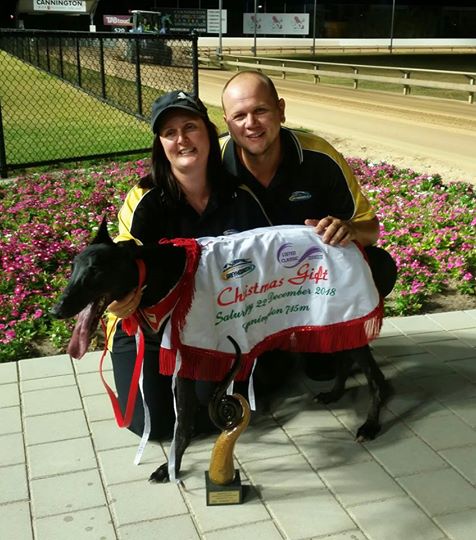