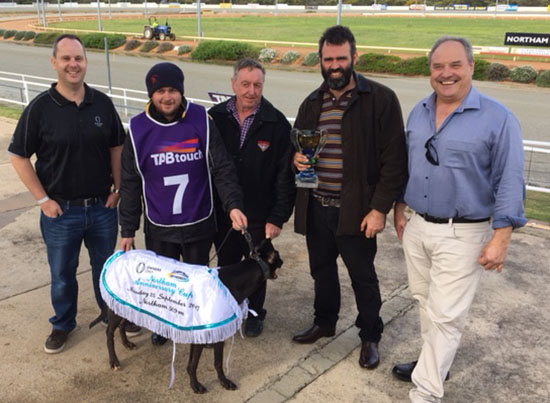 The Northam Anniversary Cup was first run in 1997 when Kathy Bromley won with Rip Van Rosco. Other notable winners of the time honoured event are Worthy Allegro (2002), Stylish Speed (2005), Elle Gee (2007), Sandeez Jack (2009), Spot On Pedro (2013) and Hello I’m Leo (last year). Another quality field was assembled for this year’s edition with veterans Crashing Packs and Hello Bobby both drawn well. Fastest qualifier and race favourite Ochre Keroma drew nicely in three whilst kennel mate and noted speedster Semikhah sported the pink stretch-vest. As the boxes flung open at the 509m start point outsider Blackwood Burst exploded for Bakers Hill trainer Peter Glenny, he rocketed across the face of the field and took the lead ahead of Iona Flyer (box 2) and Semikhah (box 8). Ochre Keroma and Crashing Packs entered the back straight in fourth and fifth positions but tangled badly and both dropped to the back of the field. This left Blackwood Burst three lengths clear leaving the back straight and while Semikhah was weakening, Iona Flyer and Thru The Years were both building momemtum. The buffer proved to be enough for Blackwood Burst who held on to win by one length. Thru The Years rocketed home for second ahead of Iona Flyer. With race favourite Ochre Keroma unplaced and the winner returning more than $30 on tote, the Trifecta returned $2,161 and the First Four was a mammoth $10,486. Blackwood Burst clocked 29.78 and has now won 10 of 48 career starts.

Race 5 Number 5 KARMA TRAIN : Flew from the boxes before leading throughout in an impressive 29.90.