Greyhound racing is an exciting sport and a multi-million dollar industry. In Western Australia, the industry attracts around 2,000 participants who enjoy the advantages that this great sporting spectacle provides.

Greyhounds WA Cannington
We race at Cannington three-four times a week (Monday, Wednesday, Saturday and every second Sunday) and feature mainly city grade racing along with some provincial and country grade racing. There are between ten and twelve races on the programme, with up to eight greyhounds in each race.

Greyhounds WA Mandurah
Mandurah Greyhounds races three-four times a week (Tuesday, Thursday, Friday and every second Sunday) and provides provincial and country grade racing. There are between eleven and fourteen races on the programme and similar bet types to the city track. Mandurah Greyhounds offers racing over 302, 405, 490 and 647 metres. The current Mandurah track commenced racing 2 November 2006 and has a circumference of 599 metres.

Greyhounds WA Northam
Northam Greyhounds race Monday afternoons April to October. There is no racing November to March. Ten to twelve races are scheduled for each meeting. Northam Greyhounds offers country grade racing over 297, 509, 588, and 721 metres. Northam is the first track in WA to be built inside a trotting venue, a structure which is more common for the larger Eastern States courses. The venue offers country grade racing, initially catering for young greyhounds and lower grade dogs.

Greyhound racing not only provides the fastest, most graceful of sporting spectacles, it also provides the opportunity to become involved in the thrill of owning and racing your own greyhound. 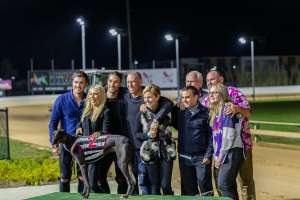 The financial rewards for being an industry participant can be an exciting part of the sport with stakemoney for Western Australia exceeding $10 million.

The most prestigious event on the racing calendar in Western Australia is the SKY Racing Perth Cup. In 2021 this Group 1 event (the highest classification in Australia), will provide over $225,000 in stakemoney, with $150,000 for the winner alone. The Group 1 SKY Racing Galaxy $150,000 (with $100,000 to the winner) is one of Australia’s richest staying races. 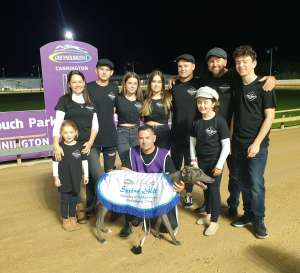 Most owners of greyhounds are involved in the sport as a hobby and therefore earnings from stakemoney are tax free.

All WA bred greyhounds are eligible for the WESTCHA$E Incentive Scheme. For details click here.

First Stage – Rearing:
In the first stage of training, the greyhound pup develops its muscles through exercise in a controlled manner, thereby ensuring that they develop in an appropriate way.
At this early stage in their life the diet of the greyhound pup also plays a major part in their development. Until they reach the age of six months, a pup must be fed four times a day with the regularity of meals reducing to twice a day between the ages of six and twelve months.
The cost involved in having a pup reared is approximately $60 – $80 per week with the owner also responsible for the cost of a yearly immunisation booster and worming, as well as any veterinarian expenses incurred.

Second Stage – Education:
When a greyhound reaches between 13 and 14 months of age it should be ready to be educated to chase. This education process involves developing the skill the greyhound requires to perform on the race track. This is a very labour intensive exercise and as a consequence trainer fees will rise to approximately $80 – $110 per week.

Third Stage – Training:
Once a greyhound has developed the skills required to perform on the race track it begins formal training. The nature of this training will vary with the individual greyhound and the training style of trainer selected.

As with the other stages of the greyhound’s development, the trainer’s fee will include the feeding of the greyhound but generally will not include any veterinarian’s bills incurred.

When the greyhound has reached 16 months of age it is eligible to race.

Racing & Wagering Western Australia rules that a greyhound cannot race prior to this age, however like people greyhounds develop at different rates and therefore some may not race until they are 18 months of age or even older.

Qualifying conditions apply for Maiden greyhounds which have not won or been awarded a first place in any race, heat or final behind an artificial lure. Once qualified, your greyhound may be nominated for any relative Qualified Maiden race.

The first step to racing your prepared and qualified greyhound is to nominate it for any of the eligible scheduled races for either of the three tracks during the ensuing “racing week”. It is important to read the Conditions of Entry on the nomination form prior to lodging, with all of your preferences clearly noted. The more preferences you provide the greater the opportunity you will have of gaining a start.

The number of nominations received for any given race will determine whether your greyhound will gain selection. A Racing Aims and Grading Policy booklet highlighting the system under which all greyhounds in Western Australia are graded is available upon request from Racing & Wagering Western Australia. Once selected, it is simply a matter of producing your greyhound at the track in a good racing condition.

Any person who is involved or interested in the industry is eligible to become a member of the Western Australian Greyhound Breeders, Owners, Trainers Association (WAGBOTA).