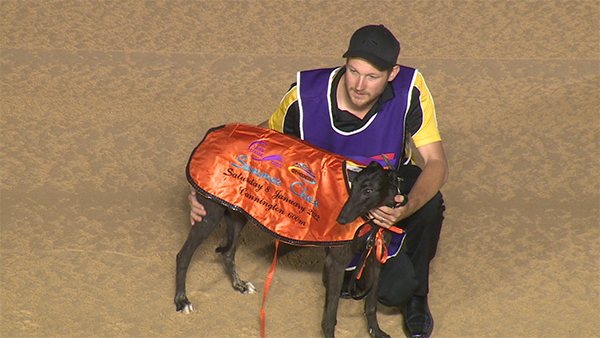 “All Zipped Up takes Summer Chase for Kavanagh”

The Summer Chase is a distance event that has been held since 1988 and run over a variety of distances ranging from 600m to 740m. Notable winners are Sandalisa (1995), Fly Guy (2001), Lewie The Legend (2005), Neil Monelli (2018) and Redcap Monelli (2021). Mambo Monelli started a warm favourite in this year’s edition after lowering the track record in his heat. He led all the way from box one and clocked a sizzling 34.20 but faced a tougher assignment tonight given he had to overcome box six in the early stages. All Zipped Up (box 2) and West On Mia (box 7) flew out and All Zipped Up with the inside advantage held the lead. Mambo Monelli made ground rapidly in the middle stages to challenge but was unable to wrestle the lead away from All Zipped Up. All Zipped Up led throughout for Nambeelup trainer Sean Kavanagh and took his career earnings over $125,000 for the Peter Cameron managed Big Boy Brae Syndicate. David Hobby runners Mambo Monelli and Cascade Monelli filled the minor placings respectively.