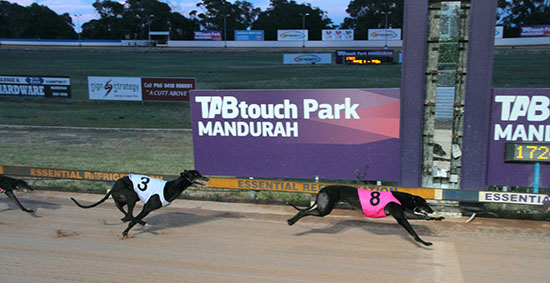 Krystal Shinners unveiled a very smart young pup tonight when It’s A Storm strolled to an effortless maiden victory over 405m. The son of Barcia Bale qualified in a brilliant 22.65 last Tuesday and was sent out as an odds on favourite ($1.30) this evening. He speared out of box six to find an easy lead before blitzing his opponents to score by twelve lengths. His time of 22.69 was outstanding, a time rarely recorded in maiden grade. Fellow first starter Jimmy Junior finished second and a neck away third was outsider Pyjamas. It’s A Storm is owned by Greg Sprod, is only two years old and looks set for a very bright future.

Race 4 Number 4 JACKPOT JUNE : Began like a rocket only to be pipped on the post by favourite Nanza Gunn, she is ready to win.