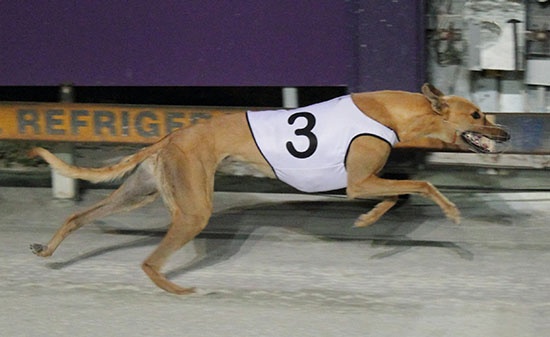 MARYDOLL (Elite State- Flying Sienna) jumped to the lead in the final of the Greyhounds WA Sprinters Plate and was to quick for her rivals, defeating an elite group of sprinters. The Kody Charles trained bitch defeated the favourite and track record holder Frida Monelli by 2 lengths in 21.74.
Photo: Marydoll in action at Mandurah

HOTSHOT MONELLI (Magic Sprite- Dyna Sandy) flew home along the rail to claim Ballistic Blue and his Maiden victory in the process. The black dog has always promised plenty since qualifying, however has taken 23 starts to break his Maiden status. It continued the winning form for trainer David Hobby whose Gr 1 Perth Cup winner Trouper Monelli named the Greyhound Clubs Australia greyhound of the month for April.

YUNDERUP KAYLA (Barcia Bale- Keira’s Charm) recorded her first win at Cannington with a come from behind victory over Marg Monelli, scoring by a half head in 30.34. The Andrew Mclaren trained bitch was narrowly defeated the week before behind Sunset Gucci in a PB 30.28.