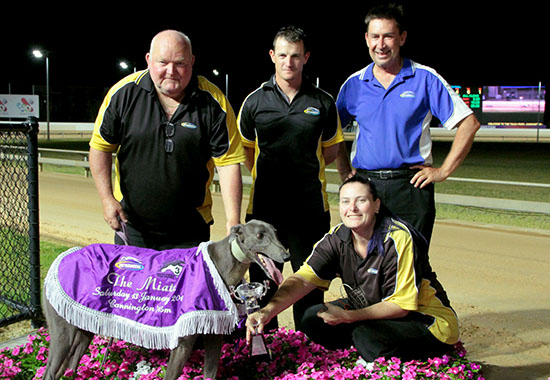 NEIL MONELLI (Barcia Bale- Dyna Sandy) claimed a last stride win over Quick Jagger to win the Gr 3 The Miata in track record time of 41.66. The David Hobby trained blue dog has always promised to be a star and tonight he ran home from 5 lengths off the leader Quick Jagger going off the back straight in 29.58. He then lunged on the line to win by a neck, with the win taking close to 2 lengths off the track record set by Petunia Monelli back in December. It was his first win in 3 starts over the 715 metres. Quick Jagger also improved on his heat winning time of 41.78 and was gallant in defeat.

STARLIGHT ASHA (Cosmic Rumble- Starlight Delly) led throughout over the 600 metres for trainer Linda Smithson. On a night that honoured Starlight Delly’s litter sister Miata, the black bitch stopped the clock at 34.99 in recording her 4th win from 7 starts over the middle distance.

TROUPER MONELLI (Fernando Bale- Bingle Monelli) crossed from box 5 to lead throughout in the FFA, scoring by 5 lengths in a PB 29.66. Trainer David Hobby prepared the first two across the line with litter brother Benny Monelli finishing second 9 lengths ahead of Sassy Ginger who found trouble along with race favourite Astrozone. Trouper Monelli has now won 12 times from 26 career starts.