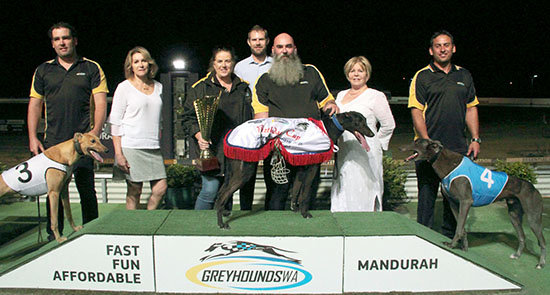 As the boxes opened Miss Bamsy (box 1) and Marydoll (box 3) exploded to contest the lead while Perth Cup winner Equanimity settled close in third position. At half way Miss Bamsy and Marydoll were matching motors but Miss Bamsy held the inside advantage. As the pair straightened the Jackie Wilson trained Miss Bamsy found more and dashed away to score a tenacious win in 22.53, a time just 0.01 outside of her personal best of 22.52. Marydoll held second narrowly ahead of Equanimity and a breath away fourth was the fast finishing Dandalup Brutus. Miss Bamsy took 18 starts to win her first race, and that was in Adelaide last May. Since being purchased for just $2000 and coming to WA she has won an amazing 15 races from 22 starts at the Mandurah venue. She has also earned connections over $50,000 in stake money.

Race 6 Number 2 DANDALUP BRUTUS : Caught the eye with a fast finishing fourth in the Birthday Cup.

Race 7 Number 9 RAPID INTENTION : Overtook some handy types and is one to watch.