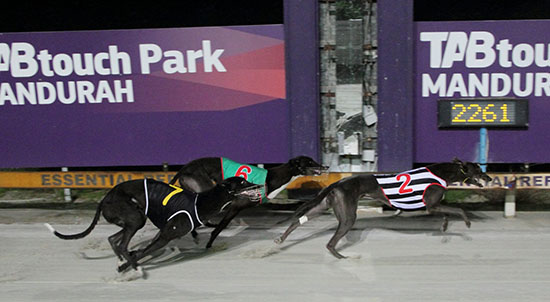 Back in October Don Chendo sired chaser Aysum Black qualified over 520m (at Cannington) in a pedestrian time of 31.22. He failed to beat a runner home at his first two race starts before improving over 405m at Mandurah at his third run when third and beaten less than a length. On January 2 he proved that performance was no fluke when he broke his maiden status over the 405m distance in 23.25. Banjup trainer Ben Abercrombie opted for a drop in journey tonight when he jumped from box one in the $29 Thursday Buffet Stake over 302m. After a decent jump the 31kg greyhound zoomed to the front before surging clear in the home straight to score by five lengths. The Nambeelup based Mooshka chased him home for second and a head away third was the Barragup prepared Jessie Quick. Aysum Black clocked a fast 17.10 and turns three years old next month. Given his small amount of race starts he looks to be a late bloomer with a promising career ahead of him.

Race 5 Number 1 TIM BERR : Ran down the smart King Tony to win in 22.94. Seems to be racing with more confidence.