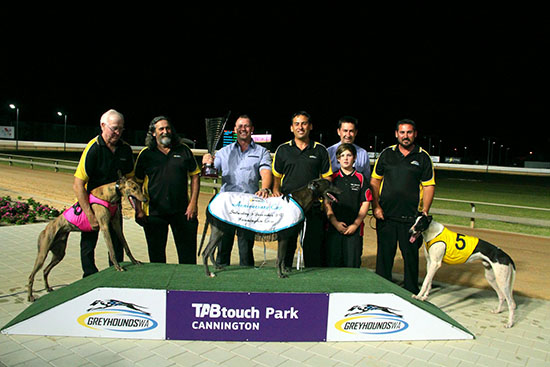 EQUANIMITY (Barcia Bale- She’s Historic) led throughout to take out the Greyhounds WA Anniversary Cup Final. In what has been a remarkable year for trainer Enzo Crudeli and owner/breeder Robbie Brankstone, the WA bred star has now won the Gr 1 Perth Cup, Gr2 All Stars and Anniversary Cup feature finals. The win in 29.86 was over kennel mates Sassy Ginger and Bundles Galore.

WEST ON CHARLIE (Kelsos Fusileer- High Recall) led throughout and recorded a slick PB 34.68 in scoring by 8 lengths for trainer Chris Halse. The well bred black dog is usually slowly away, however once landing on the arm ran some very good sectionals and went within .2 of a second of Petunia Monelli track record.

TROUPER MONELLI (Fernando Bale- Bingle Monelli) held out the speedy Pepper Fire into the first corner and then drew away for a 2 length win in the FFA over Gold Reserve. The David Hobby trained dog was stepping up in class and didn’t miss a beat as he scored in a time of 29.92.

WEST ON BABE (Barcia Bale-Disco Girl) caused an upset when she led throughout in the first leg of the Quaddie for trainer Chris Halse. The red fawn bitch found the lead early and then was able to hold off an unlucky favourite Eminent Reality who found plenty of trouble after being slowly away.