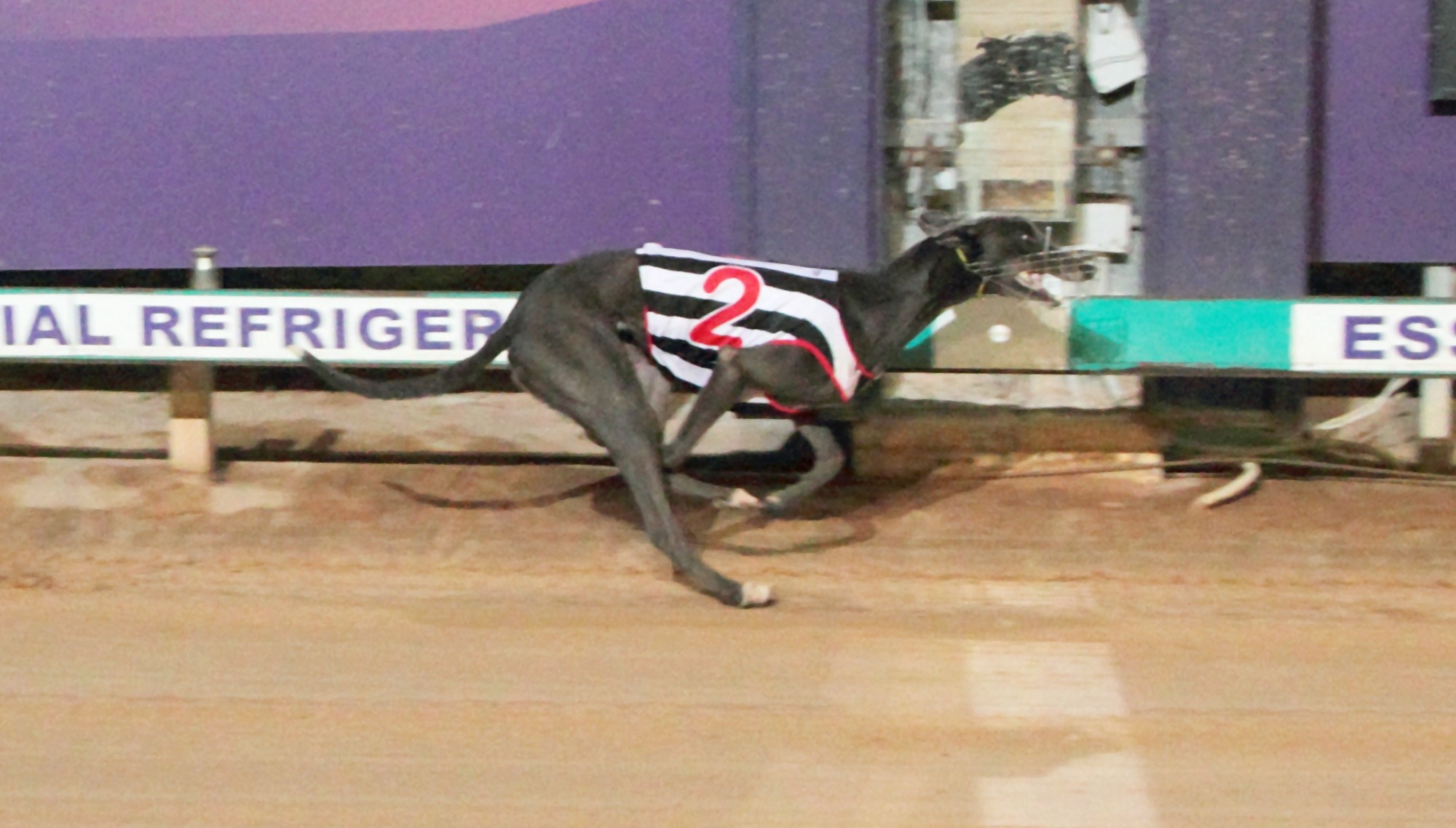 Nicely bred youngster Jordan Sparkles made full use of box two when she took out tonight’s second heat of the Maiden Series over 405m.

The daughter of Black Magic Opal won a qually over the same distance three months earlier in a promising 23.16 and was well supported to start favourite from her handy alley.

Outsider Sunshine Bella set the pace from box six before being overtaken by Jordan Sparkles in the home straight.

Jordan Sparkles posted 23.07 on a wet track, defeating the fast finishing Scary Fun by a length and another length away third was the tiring Sunshine Bella.

Jordan Sparkles is owned in Victoria by Seona Thompson and turns two next month. 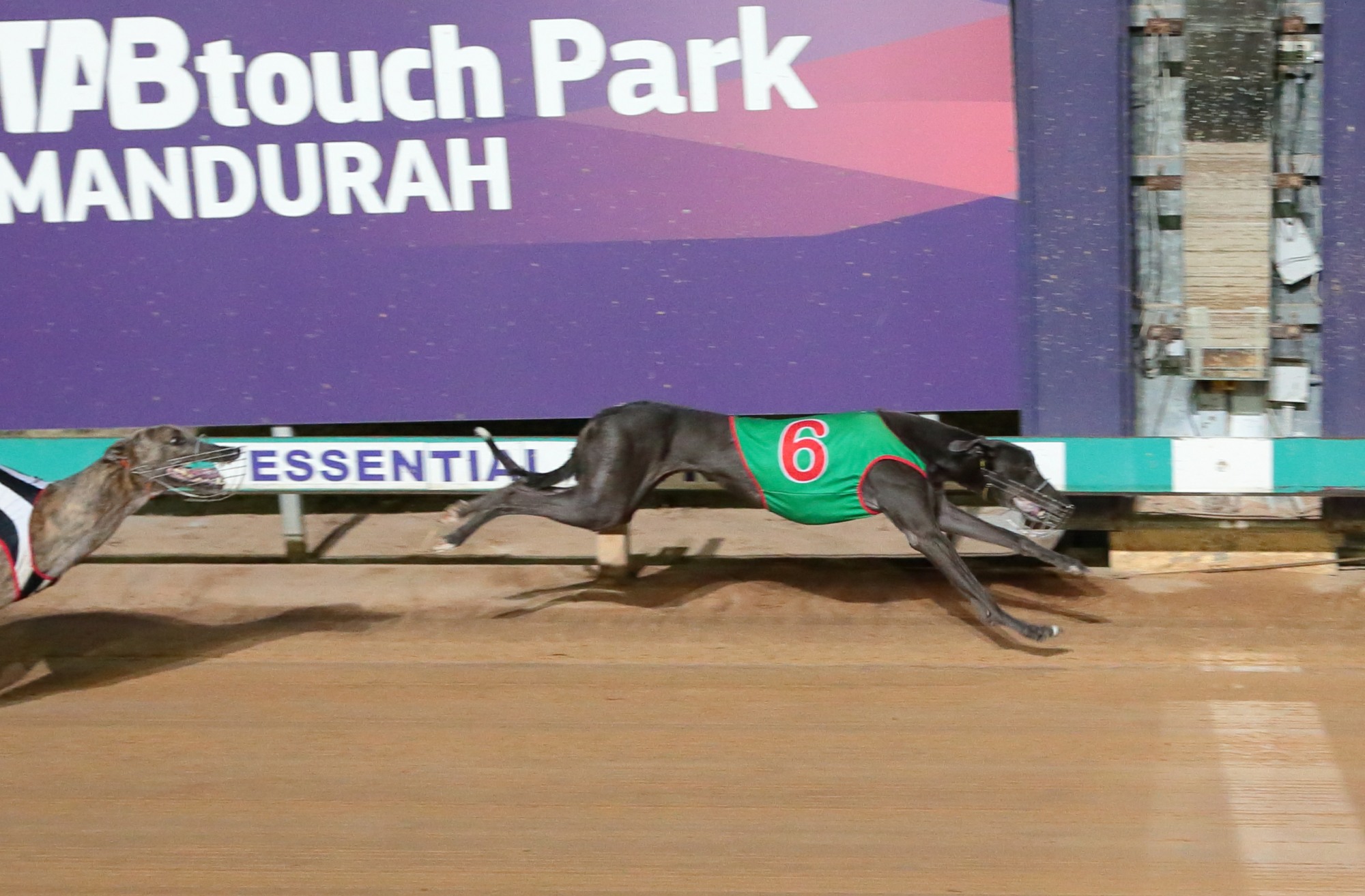 The son of Knocka Norris zoomed to the lead in the middle stages before recording 23.17 and winning by more than a length.

Outsider One Eye Blink who set the pace held on for second position a nose in front of race favourite and first starter Sunset Chernobyl.

Vitalogy’s mother Times Square was a brilliant race bitch, winning 21 races and over $134,000 in stakes.

Race 1 Number 6 AMAZING ANNE : Hit the line with power in her legs and is one to follow. 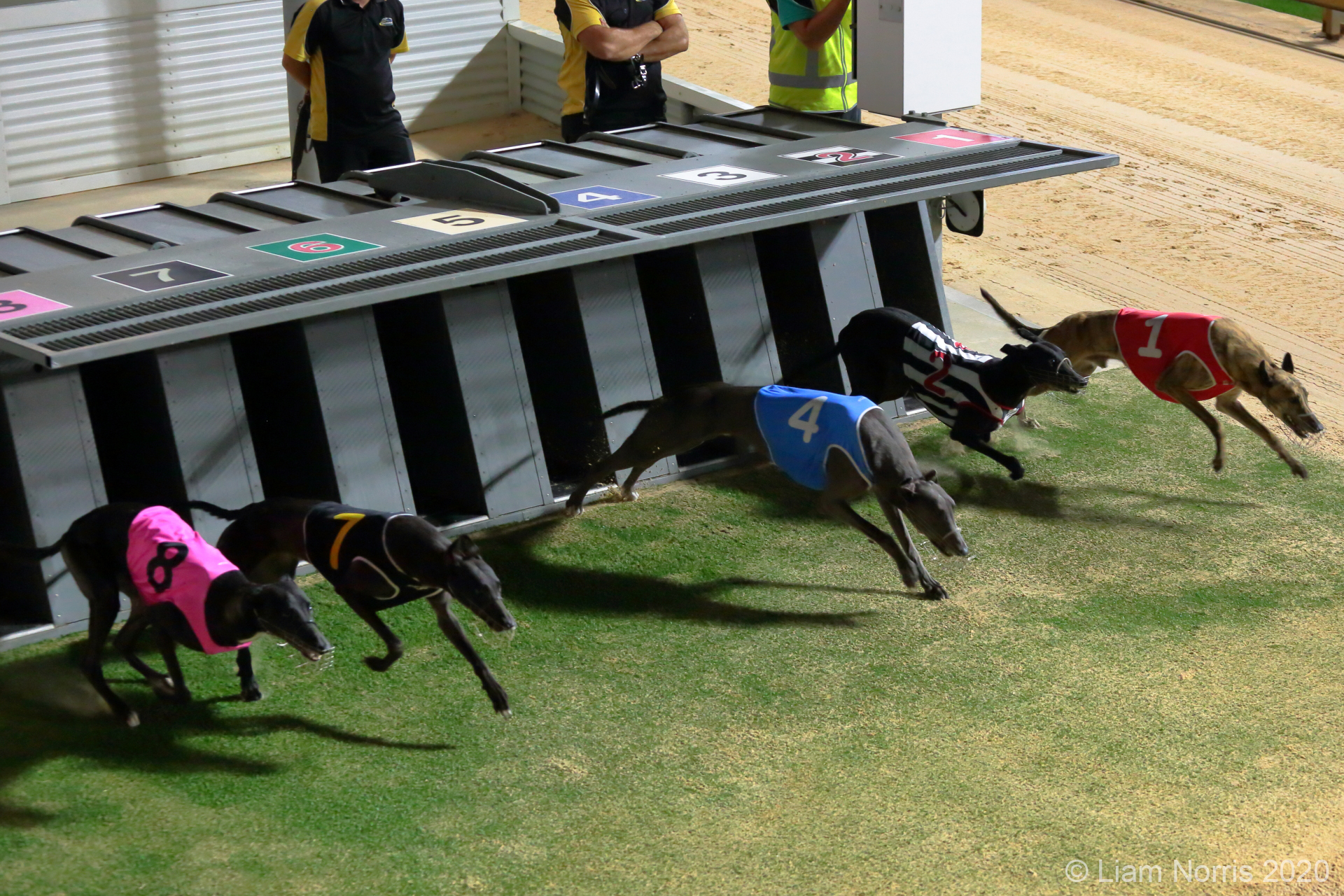 Spolly’s Angel finally broke her maiden status tonight when she zoomed down the outside to claim victory in a steady 23.18.

The Tony Scott trained daughter of Banjo Boy had been a runner up at 8 of her 11 Mandurah appearances and at 10 of 22 overall.

Dandalup Duke flew out to lead from box two but was conquered at the top of the straight by Spolly’s Angel who went on to score by half a length over the fast finishing Amazing Anne.

With just the one win to Spolly’s Angel’s credit she has still accumulated over $6,000 in earnings from all of the seconds. 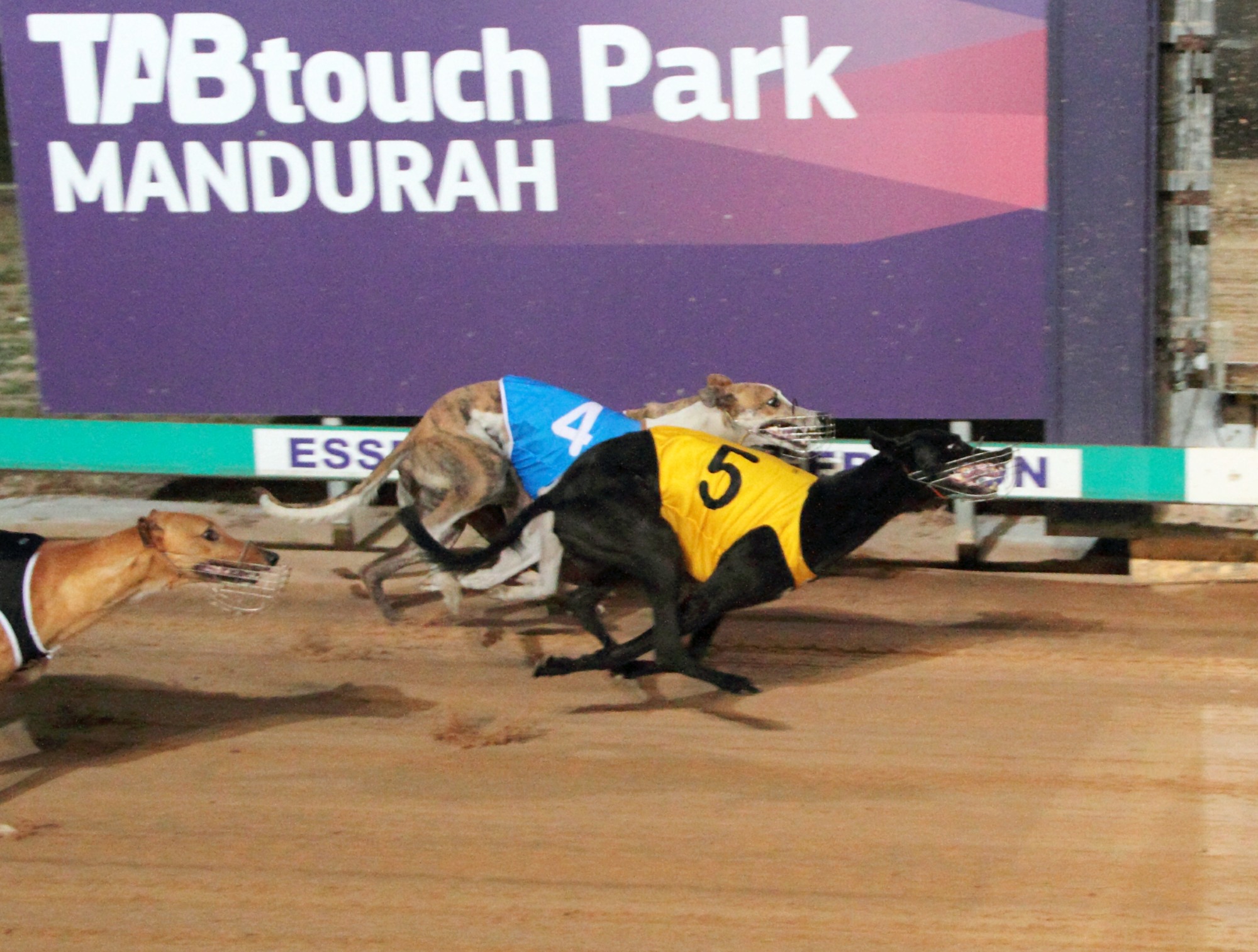 He was sent around as one of the favourites at his next four runs but after slow getaways and first turn interference he finished unplaced and down the track.

Tonight from box eight over 490m he completely missed the kick and found himself a long last after fifty metres.

As the field packed ahead of him he navigated his way down to the fence and zoomed past them all to take the lead leaving the back straight.

From there he powered away to beat rank outsider Seamer by two lengths and close up third was Grand Fletch.

Moon Time posted a handy 27.93 and if he can improve his box manners and stay out of trouble will win plenty of races.

Race 3 Number 8 FELIX OTIS : Was posted wide for most of the journey but hit the line strongly. 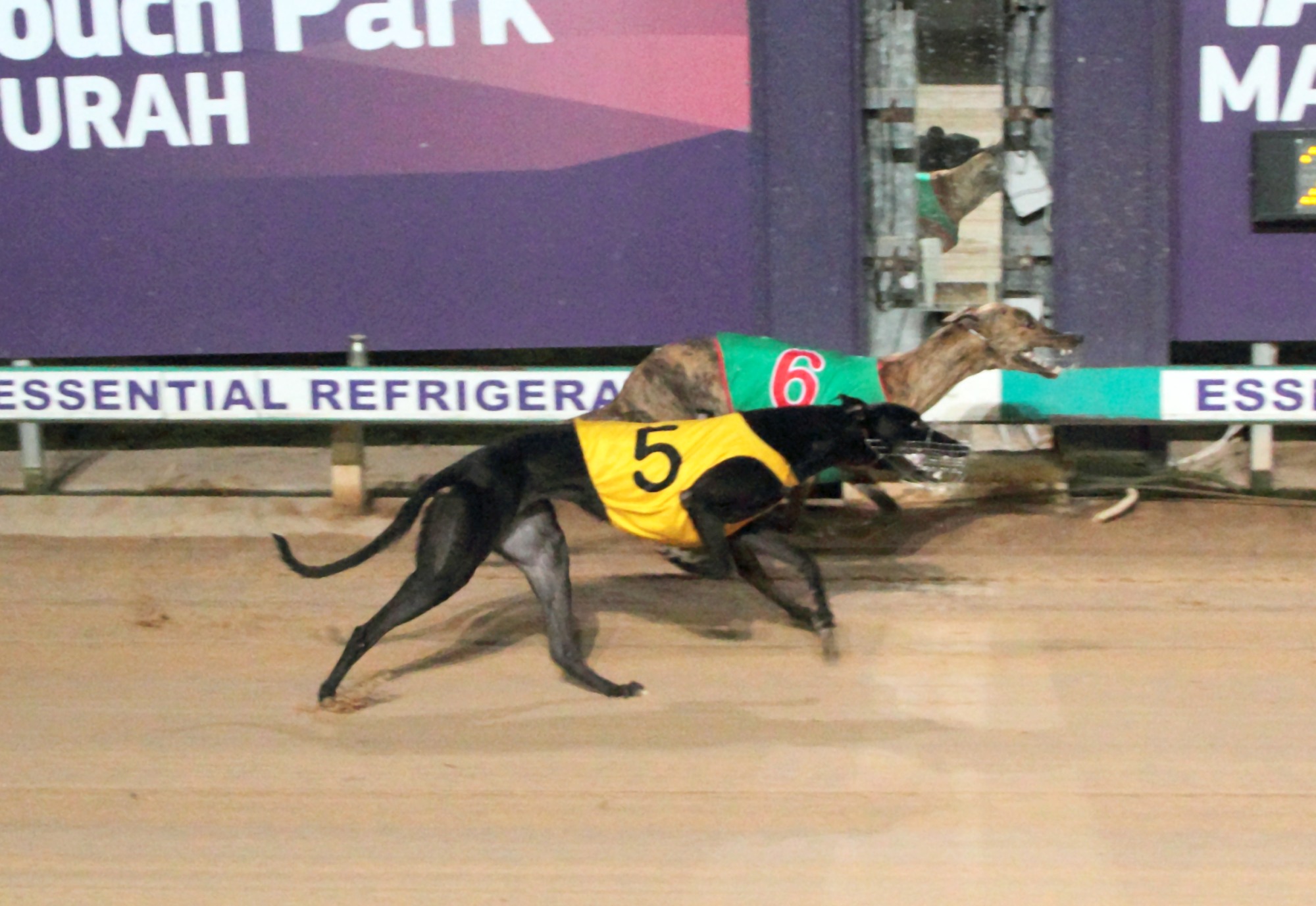 The son of Hostile was heavily backed from box four after debuting with a close up third a week earlier from box eight.

He flew out of the boxes to take an early lead and despite coursing wide in transit saluted by a comfortable margin of four lengths in a smart time of 22.81.

Cash Money Hero was born in January 2018 and was bred by Rowe who also trained the mother Olivia Benson.

Olivia Benson was a terrific race bitch accumulating fourteen victories over a variety of distances and earned $70,000.

In 2016 she was the runner up in the Group Two WA Oaks behind Milly Keeping and also contested feature races in New South Wales.

Race 2 Number 8 HEIDI ROSE : Made up many lengths to run a nice third over 490m.