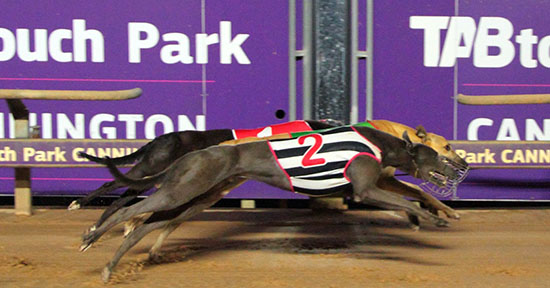 SPLASH BROTHER (Knocka Norris- Secret Queen) railed brilliantly going a long the back straight rushing past his rivals before going on to win by 5 lengths in 30.80. The Cosi Dagostino trained dog had recently won his Maiden over the 405 metres at Mandurah in 23.12 after being slowly away.

STOP LIGHT (KINLOCH BRAE- Starlight Delly) recorded his third win in succession after running down the leader Flying Zarli along the back straight and then going on to win by 5 lengths in 35.18. The Jamie Marsh trained dog has won his past 2 starts over the 600 metres and also recorded a slick 490 metre win in 27.67 earlier this month.

CANYA MAX (Fernando Bale- Rinoa Bale) was too classy for his rivals as he scored a 3 length win in 30.36. The Steve Withers trained dog has now won at his past 3 starts and the win was his first at Cannington over the 520 metres after a recent placing behind Infrared Moment earlier this month.